The three-martini lunch might have loosened tongues in the past. These days all it takes is a little coffee for a fund manager to reveal his deep-seated longing for the end of the year.

I recently had coffee with a nice fellow who was looking forward to presenting prospective clients with rosy five-year performance figures in the new year. By that point the crash of 2008 will have largely rolled out of the short-term numbers and into what amounts to the distant past for many investors. All that will remain is the rebound.

When it comes to stocks, I take a different tack and look for the long-term losers. It might seem counter intuitive, but such stocks tend to be inexpensive based on various measures of financial merit and they've had time to make improvements. Both factors are positives.

My coffee conversation got me thinking about whether there might be bargains to be found among the stocks that still languish below their lows from the fall of 2008.

Hewlett-Packard Co. appears to be a good candidate. The technology giant from Palo Alto, Calif., suffered from a string of problems over the last few years. As a result, its stock has fallen almost 19 per cent over the last five years, not including dividends.

The firm's tale of woe begins on the top line. Its revenues slipped by a percentage point on average each year over the last five years. Even worse, its profit plummeted by 9.3 per cent annually over the same period, according to S&P Capital IQ.

In addition, HP has a nasty habit of paying too much when it buys other companies. The firm's purchase of Autonomy Corp. represents a prime example. HP bought the software company for more than $11-billion (U.S.) in late 2011. It then wrote down the value of the intangible assets related to the purchase by a whopping $8.8-billion a year later. It's hard to imagine a faster way to make a giant pile of cash less tangible.

The disastrous deal prompted a change in management and Meg Whitman, the former CEO of eBay, was brought in to clean up the mess. While the jury is still out on her efforts, HP has returned to profitability. It has also become a little more shareholder friendly.

Dividend investors will appreciate its recent dividend growth record. Back at the start of 2011 the company paid 8 cents a share in dividends each quarter and had done so for many years. But it now pays 14.5 cents a share and it seems likely the company will boost its dividend over the next few years. Its stock now yields 2.1 per cent on an annual basis.

HP has also been buying back stock, which is a good thing given its depressed price. It redeemed an average of 4.5 per cent of its shares annually over the last five years and 2.3 per cent over the last year. Dividends and share repurchases are both good ways to return cash to shareholders. They also make it easier for investors to hold tight and wait for better times.

Although the company's stock remains well below its record highs, it has bounced back from its lows of last year. Nonetheless, value investors will like its low price-to-earnings ratio of 10.3 and low price-to-cash-flow ratio of 4.5. Don't get me wrong, HP isn't a sure thing. The firm could make another disastrous purchase. In addition, the risk of obsolescence constantly stalks its business. It's hard to know how computers will change over the next 10 or 20 years as new technologies develop. The decline of the PC and the rise of Apple and Google represent competitive concerns and others will appear in the future. That's all to say that I'm not betting the house on the stock, but HP is worth a second thought over a coffee or two. 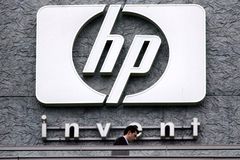