Donald Trump's Christmas present to U.S. equity investors will be a big one, if history is any guide.

Share repurchases may jump by more than 70 per cent on an annualized basis to $875-billion (U.S.) amid a tax overhaul that encourages the repatriation of profits held abroad, according to an analysis by Bloomberg Intelligence. At least, that was the magnitude of growth in completed buybacks in 2004-05, the last time the U.S. firms were granted a tax repatriation holiday.

For anyone who thinks repurchases drive share gains, an explosion this big would put to rest concerns that crept up in recent months as the pace fell off. Completed buybacks in the year ended Sept. 30 were $555.4-billion, near the lowest level since 2013, data by Birinyi Associates show.

"The buyback announcements will come in the first half of this year, and most of them will change the buyback policy in the short run, if the money goes to buybacks," said Gina Martin Adams, chief equity strategist at Bloomberg Intelligence. "If we see the buyback yield change and move positively in a meaningful way, it increases the appeal of equities relative to other classes."

Conceivably, it's another reason for cheer among U.S. equity investors, who last week were the most bullish on U.S. stocks in more than three years, according to a weekly poll of clients by the American Association of Individual Investors.

The tax overhaul implies that the U.S. firms' overseas income held as cash – normally taxed at a 35-per-cent rate upon being brought home – would be subject to a 15.5-per-cent rate, while non-cash holdings such as real estate would have an 8-per-cent tax rate.

Tech megacaps that have a large international presence and hoards of cash stashed overseas may spearhead the growth in the rate of buybacks. Apple Inc. may increase its share buyback by $69-billion on top of the $166-billion already spent on share repurchases from June, 2012, to September, 2017, according to Gene Munster, a co-founder at Loup Ventures who had previously worked as an analyst at Piper Jaffray Cos., where he was known for his accuracy in predicting Apple Inc.'s financial potential.

On the other hand, what happened during the time of the U.S. tax holiday in 2004-05 might not hold true in 2018, and some analysts are voicing concerns.

"I am trying to figure out what the companies are going to do with their tax money, but so is every other analyst on Wall Street," said Matt Maley, a strategist at Miller Tabak & Co. "I think we are to see a lot of surprises in the next few months. I wouldn't bet all the money on just buyback or just dividend stocks." 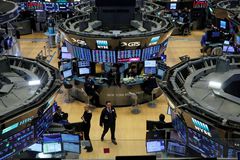