Tesla's chief executive officer dialed back his forecast for 2015 vehicle deliveries, saying that getting the new sport utility vehicle's middle-row seats just right is proving thornier than expected. The added threat of not having enough of other interior parts puts the original sales plan at risk, he said.

"Our biggest challenges are with the second-row seat," Mr. Musk said Wednesday during a conference call with analysts. "It's an amazing seat, a sculptural work of art, but a very tricky thing to get right." He added that some interior trim components could become roadblocks, but the so-called falcon- wing doors weren't going to be a problem.

Tesla shares fell 8.9 per cent to $246.13 at the close Thursday after plunging as much as 13 percent for the biggest intraday decline in 21 months.

"It was a surprise to us," said Ben Kallo of Robert W. Baird & Co. about the lower forecast for the year. "In the long run 5,000 cars is not a big deal, but it does raise eyebrows about the longer-term ramp."

With a final tally of 11,532 Model S sales in the second quarter, the Palo Alto, California-based company delivered 21,577 units in the first half. Tesla sees third-quarter production and deliveries of about 12,000 vehicles including just a few Model X SUVs. That would leave about 16,400 to 21,400 units for the fourth quarter.

Tesla relies on thousands of suppliers and Mr. Musk said the pace of progress is "really dependent on which supplier is the slowest and least lucky."

Mr. Musk also reset expectations on 2016 production, saying that Tesla plans to produce 1,600 to 1,800 vehicles a week on average at its Fremont, Calif., factory, to allow for holidays and times when the plant will halt production to install new tools. Previously, Tesla had projected a weekly run rate of 2,000 cars and SUVs.

Mr. Musk has set ambitious targets for Tesla and his other companies, SpaceX and SolarCity Corp. As Tesla evolves into a multiproduct company that makes not just electric cars but stationary energy-storage products, expanding globally and building the world's largest battery factory, Mr. Musk is trying to be more realistic in the short term.

"We don't want to set too-high expectations," Mr. Musk said. "Winning needs to feel like winning. Could we do 2,000 aspirationally? Yes. Do we want to commit to that? Ideally not."

While lowering the bar for this year and next, Mr. Musk said he remains "confident" that Tesla will produce about half a million cars in 2020. He's said that's when investors should be able to expect the company to become profitable.

Mr. Musk pointed out Tesla made 600 cars annually five years ago. "Now we can produce 600 cars in three days," he said.

Once Tesla is producing in high volumes, it will think about localizing production in different markets, with factories in Asia and Europe, Mr. Musk said.

For now, with the steep increase in output scheduled for late in the year, even a one-week delay could reduce production by 800 vehicles, Tesla said.

"The Model X is a particularly challenging car to build, maybe the hardest car to build in the world," Mr. Musk said. "But it is an amazing vehicle and I think it will blow people away."

As production of the SUV increases, the company will become free cash-flow positive, probably near the end of this year and "certainly" for the first quarter of 2016, Chief Financial Officer Deepak Ahuja said.

The second-quarter loss excluding some items was 48 cents a share, the company said. The average of analysts' estimates compiled by Bloomberg was for a 60-cent loss.

Model S orders in Asia "nearly doubled from last quarter, helped by the initial success of our revised China strategy," Mr. Musk and Mr. Ahuja said in a letter to shareholders. Investments in the country are increasing, and Tesla is planning to raise the number of retail outlets in China this year to five from one. The company also hired a vice president of sales for Asia, whom Mr. Musk didn't identify.

Tesla has drawn down $50 million of a $750-million credit line, and left open the possibility of going to Wall Street for additional money.

"There's not a need to raise equity capital," said Mr. Musk. "There may be some value in doing so as a risk-reduction measure."

The company does have significant investment plans, including the development of a more-affordable car called the Model 3, set to go on sale late in 2017, and construction of its massive battery factory east of Reno, Nev.

Progress on the so-called gigafactory continues, with manufacturing of battery cells, modules and packs to begin there early next year. Tesla also said it will ramp up production and delivery of its Tesla Energy suite of batteries for use by homes, commercial businesses and utilities in the fourth quarter.

States like California see energy storage as a critical tool to better manage the electric grid, integrate a growing amount of solar- and wind-based generation and reduce greenhouse gas emissions. Tesla has said that its stationary batteries have the potential to scale faster than vehicle sales.

Mr. Musk was also asked if Tesla sees a business opportunity in supplying cars for ride-sharing startups like Uber Technologies Inc. or is considering selling on-demand electric mobility services directly on its own platform.

"That's an insightful question," said Mr. Musk. He declined to answer it.

This week in Las Vegas two other researchers will demonstrate their ability to stop a Model S remotely. They were able to gain partial control of the Tesla only after having access to the car and plugging a laptop into its computer, the Wall Street Journal reported. 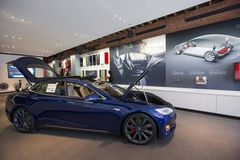