An analyst has forecast that spot prices for uranium could rise to $50 per pound over the next twelve months. Please give me your opinion on these stocks and ETFs : URZ, URG, CCJ, DNN, URRE, UUUU, NRL, NUCL.

I will undertake a scout of Uranerz Energy Corporation (URZ) today and then proceed through your list over the next number of days until the assignment is complete.

URZ is a U.S. mining company with a substantial land position in the Powder River Basin of Wyoming. In April of 2014 the company kicked off operations at their Nichols Ranch ISR uranium project. ISR is an in-situ recovery process that uses a leaching solution to extract uranium from sandstone uranium deposits.The project is licensed to produce 2 million pounds of uranium per year from the operation and is forecast to reach output of 200,000 to 300,000 pounds in 2014.

URZ and the entire sector have been under pressure since March of 2011 when the Fukushima disaster saw atomic energy reactors in Japan shut down. In addition, facilities operators around the world had to rework their assumptions and extend their time lines associated with new construction. Those factors all contributed to reduced demand for yellow cake with the negative consequences falling on uranium miners.

An examination of the charts will inform my opinions on URZ. 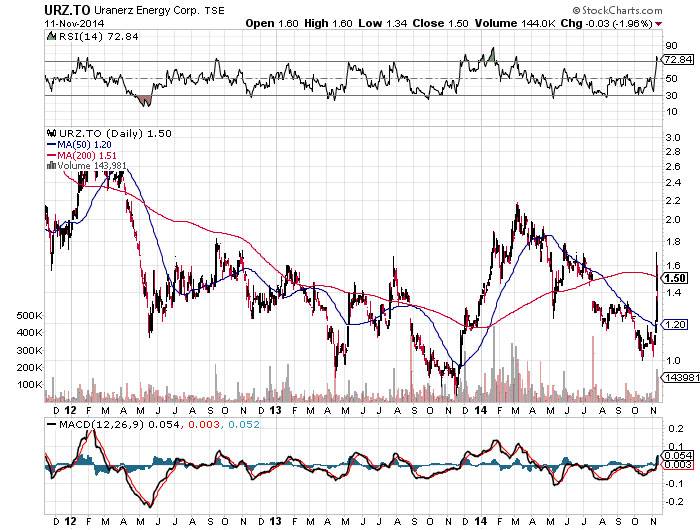 The three-year chart indicates that the last twelve months has provided some fairly significant trading opportunities. The lift off the 52 week low in November of 2013 to the 52 week high of $2.18 by March of 2014 was followed by eight months of generally aggressive selling. From the March high there was consistent resistance along the 50-day moving average until the breakout in November of this year. The push off of $1.03 in November was signalled by the MACD and the RSI in mid-October and preceded analyst comments on the state of the industry and the news release of Nov. 5, 2014, declaring that URZ's permit application for a third unit in the Powder River Basin was complete. 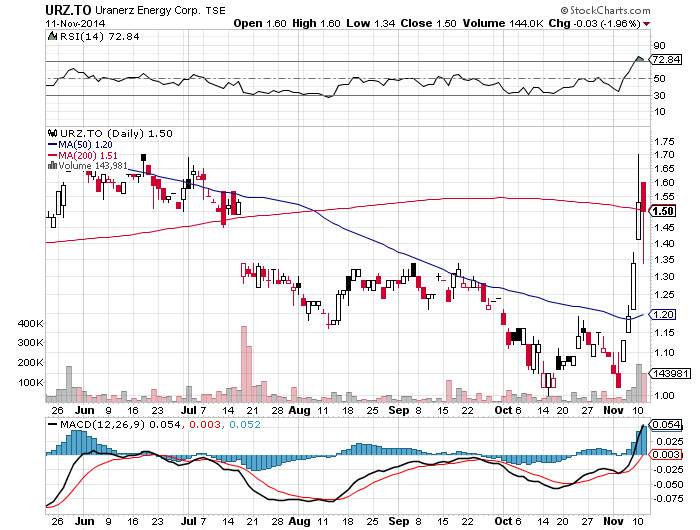 The six-month chart highlights the buy signals generated by the momentum indicators in October and the double bottom that formed between Oct. 14 and Nov. 5. A double bottom is a reversal pattern that indicates that selling pressure that had controlled the market could be about to end. There has been some significant buying that has come into the stock in the last three trading days but what we need to see is sustained buying over a longer period of time.

If you are comfortable with the risk associated with URZ then you could start accumulating a position with a $50.00 per pound price for yellow cake as your milestone.