Skip to main content
Lou Schizas
Special to The Globe and Mail
Published May 4, 2015

Bought NWC about a month ago.. Seems to be heading in the wrong direction. Is there something I should know about it & why it's not performing. Would appreciate your views on this seemingly well rated company.

Thanks for the assignment. This will be the second time that I examine the case for The North West Company Inc.. The last time was on June 29, 2009 when the units were trading for $15.16, and the assets were organized as an income trust. Morton was attracted to the 8.9-per-cent yield on distributions and wanted to know if the units were worth holding and if he should buy more. The research conducted six years ago pointed to trust units that had been selling off in response to the 2008 financial crisis . It was advised to establish a core position and use another allocation of capital to trade in the established range while waiting for a breakout and enjoying the yield.

Retrospectively, that was the right call. NWC converted to a dividend paying corporation, as did most of the refugees who straggled out of the Halloween Massacre of 2006, and provided investors with income and growth. A look under the bonnet will help identify what we might expect from NWC in terms of trend, support, and resistance. 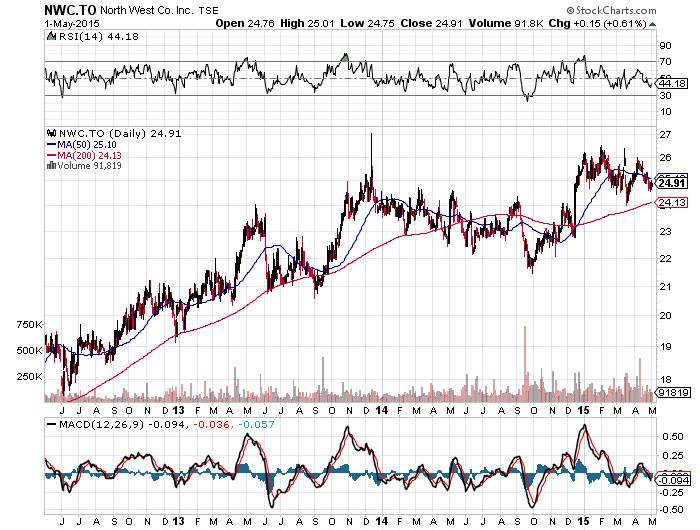 The three-year chart indicates that you may have been a buyer near $26 and are now concerned about the pullback to the current trading range. Taking a look at the trading pattern since the beginning of 2015. you can see that $26 has been providing resistance over multiple attempts to move higher. What is also worth noticing is a slight downtrend that has been established over the same time period. We also have to acknowledge the break below the 50-day moving average and the test of support at $24.50.

The moving averaging convergence divergence (MACD) and the relative strength index (RSI) provided buy signals in November of 2014 as the shares came off support near $22 and made a run to the 52-week high of $26.80 by late January of 2015. 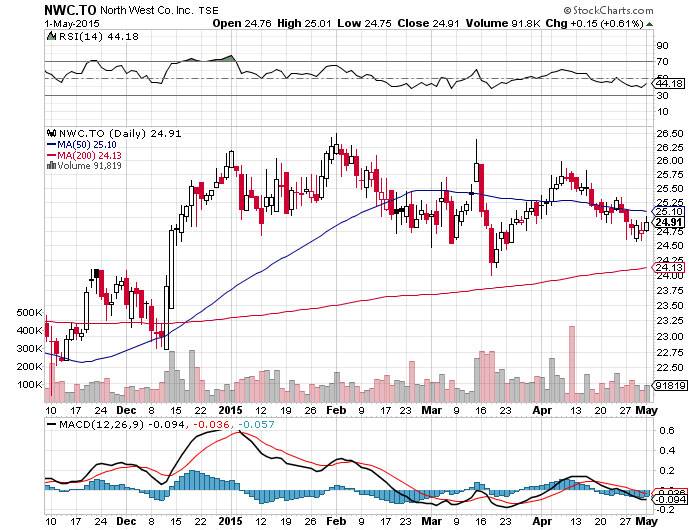 The six-month chart depicts the sell signal generated by the MACD and the RSI in early February and the meandering retreat over the last four months. I don't see this as anything other than a pullback as investors await the release of earnings in June. From the evidence provided, I would reiterate the analysis from 2009. If you like the story and the 4.66-per-cent dividend yield establish a core position and use another allocation of capital to trade the stock for profit.