Every few decades, maybe less often, gold seems to detach its shiny self from the greater economy and go berserk. Prices went vertical in the early 1860s (American Civil War) and again in the early 1930s (Depression). They're taking off again, this time in the absence of war or depression or a genuine crisis, like the end of Oprah's show. But why?

By yesterday, gold had hit a record $1,185 (U.S.) an ounce, up 13 per cent this month alone, on reports that India is open to buying another gold pile from the International Monetary Fund. India recently relieved the IMF of 200 tonnes.

In January, gold was in the low to mid-$800s. The gold bugs - the ultimate I-told-you-so crowd, even though they've been dead wrong for almost 30 years - say the price will double, and possibly double again. There is no shortage of less intoxicated forecasters who argue that $1,500 or $2,000 is inevitable. HSBC is one bank cashing in on the gold mania. This week it banished the gold pebbles held by lowly retail investors in its Wall Street vaults to make room for the great hunks of gold owned by institutional investors.

You could argue that nothing special is going on, that the average gold investor is slow off the mark. Gold's previous historic high was about $850, set in 1980. Since then, it has climbed 39 per cent - far less than the U.S. consumer price index (177 per cent) and the S&P (900 per cent). By comparison, gold is a relative bargain.

But that explanation doesn't tell us why prices might be on a high-speed elevator ride to the 100th floor of the investment tower.

To make sense of gold's rise, a good place to start is figuring out whether gold is money or a commodity. To be sure, it has elements of both at any given time, though one or the other can dominate for years, even decades, depending on the state of the global economy, gold supply, investors' whims, Latin lovers' penchant for tacky gold chains and the like.

Starting in 1981, shortly after gold went into the basement, the metal entered a long commodity phase, it appears. How do we know? The best clue comes from the jewellery market, which probably accounted for 70 to 80 per cent of purchases between 1981 and the middle part of this decade, when prices began to take off in earnest.

The dollar printing presses are running flat out, increasing the buck glut like never before. The so-called M1 supply - cash in circulation and banks' transaction deposits - is almost $2-trillion, about double the level of early 2008. A graph comparing gold prices with M1 would show the two roughly track each other and both have gone nearly straight up this year. If you think the money supply in the United States, Europe, Russia, China and Japan will soon contract, gold might not be the best investment. There is no indication this will happen in the near future.

Gold buyers seem convinced that the soaring levels of debt in the United States, the record fiscal and monetary stimulus, the rock-bottom interest rates and the tsunami waves of government bond sales will help to push the dollar ever lower, making gold increasingly attractive. In the United States, total gross public debt as a percentage of GDP will exceed 97 per cent next year, up from about 61 per cent in 2006. Total consolidated debt (government, corporate and personal), excluding the liabilities of the financial sector, are 350 per cent. This is not a healthy balance sheet.

Deficits are more likely to rise than fall, because politicians are under pressure to keep the stimulus taps open as unemployment rates rise. Low bond yields make the spending all the more attractive. The big industrialized countries will need to sell more than $12-trillion worth of government bonds this year and next to fund the fiscal spending, the Financial Times reported.

Governments may try to inflate the debt away. If it doesn't work, they will have only two choices - service the debt or default. The chances of a default are very slim, of course. But note that the volume of credit default swaps linked to the United States, Japan and Britain, which measure the cost of insuring against bond defaults in those countries, has doubled in the past year.

Defaults, real or potential, are not kind to currencies. The rise in gold prices may be just getting started. 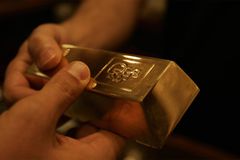