Of the Canadian retail and restaurant companies, the shares of Tim Hortons Inc. are among the most expensive, suggesting the stock is nearly as popular as the chain's coffee and doughnuts.

This points to an uncomfortable truth: By Canadian standards, Tim Hortons is still a growth stock. But when international expansion opportunities are considered, the market has mostly, but not entirely, written off Tims as a legitimate competitor.

That last little bit of optimism about Tims' growth prospects keeps the shares as high as they are. Investors need be careful, however: The company, which reports third-quarter numbers Thursday, needs to show both better trends in Canada and, soon, a plan for U.S. expansion. If not, its growth story – and the resulting high earnings multiple – will be as stale as yesterday's Timbits.

Now, to be clear, Tims doesn't need to throw in the towel and become the present-day version of an income trust. There is some expansion to be had in Canada. Analyst Phillip Huang of UBS Investment Research believes there are four to five years left of attractive growth here, as opportunities in Quebec and Western Canada provide a path for the company's goal to grow from 3,300 locations to 4,000.

Mr. Huang – who has a "neutral" rating and $56 price target – estimates that Tims' nearly 1,700 locations in Ontario represent one for every 7,900 people in the province; the Tims-per-capita is 16,300 in Quebec and ranges in the Western provinces from 12,300 (Alberta) to 15,800 (the same figure for British Columbia and Saskatchewan).

The question, however, is whether Tims' level of penetration in Ontario represents oversaturation.

The second quarter featured Canadian same-store sales growth – sales in locations open at least one year – of just 1.8 per cent, roughly half some analysts' expectations. The number of transactions in these locations actually fell year-over-year in the second quarter.

The middling numbers can be blamed on a number of factors – a more-conservative Canadian consumer, some say, or, more troublingly, tough competition from McDonald's, as Raymond James analyst Kenric Tyghe suggests. (He has a "market perform" rating and $52 target price.)

Repeats of the second-quarter math might jeopardize Tims' plans to keep opening about 140 restaurants a year in Canada. And what of the rest of the world?

It's instructive to look at what's going on at Dunkin' Brands Group Inc., which went public last year.

The company, which franchises the Dunkin' Donuts and Baskin-Robbins ice cream concepts, is the second-largest coffee chain in the world behind Starbucks.

And yet it has just 7,100 Dunkin' Donuts locations in the United States, more than half in New York, New Jersey and New England.

Analyst Stephen Anderson of Miller Tabak + Co. notes that while the Dunkin'-per-capita is about one restaurant per 9,500 in its core market, the saturation drops to one per 962,963 in the western U.S. markets that it's barely touched at all.

This adds up, Mr. Anderson suggests, to a potential 8,907 additional U.S. units if Dunkin' Brands settles for one restaurant per 22,000 residents. That's a saturation rate that's half of Tims' one per 10,522 Canadians, as calculated by Mr. Huang of UBS.

This helps explain why Dunkin' Brands commands a forward price-to-earnings ratio of nearly 22, per Standard & Poor's Capital IQ, versus Tims' 17. (Krispy Kreme Doughnuts Inc., a Southern U.S. chain that's only recently begun emphasizing coffee along with its glazed wares, has a forward P/E of 27.)

It's a shame, really, because Dunkin' Brands shares aren't a clear choice for investors: The company is debt-laden thanks to its former owners in the private-equity world; the insiders have been selling their shares in a series of offerings, which suggests the people who know the company best are taking their money off the table.

At the same time, though, the company recently increased its annual new-store opening program to 300 Dunkin' Donuts in the U.S. and 700 locations across all its brands, worldwide. Topline sales expectations for 2013 and 2014 exceed Tims', and Dunkin' Brands' earnings per share growth for the next two years is expected to be in the high teens.

Mr. Anderson of Miller Tabak – who has a "hold" rating and $34 fair-value estimate for Dunkin' Brands – says he sees room for another nationwide competitor to Dunkin' Donuts in the U.S. But he doesn't see Tims as the one. Dunkin' Donuts' "stronger brand name and more expansive franchise network are advantages Tim Hortons does not have."

Indeed, Tims actually slaps "Café and Bake Shop" on its U.S. signs to help people understand exactly what it is. That problem suggests Canadian investors may soon have to remove the "growth stock" label from the shares.

Starbucks off the boil, but steaming along Subscriber content 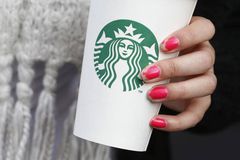 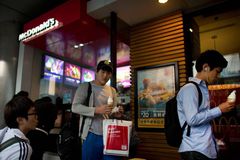