Hathor Exploration's strong run up in recent weeks may have come to an end as Cameco Corp said on Monday it is backing out of a bidding war for Hathor after being trumped by a revised $654-million bid from Anglo-Australian miner Rio Tinto. Cameco will let its $4.50 a share bid lapse when it expires Tuesday. Rio has agreed to pay $4.70 a share for Hathor, 76 per cent more than Hathor's closing price on Aug. 25, the day before Cameco made its initial offer.

Long Harbour Exploration Corp. , which closed Friday at a year low of 10 cents, announced the appointment of Peter Espig as Chief Executive Officer and President of the company. Espig is a Vancouver-based executive who began his career working in mining exploration with junior mining companies, prior to embarking on a finance career. As an investment banking executive, Espig held key positions at Olympus Capital Holdings, a New York based private equity fund, and Goldman Sachs, as a banker in Asia. He later became involved on Wall Street in creating special acquisition companies and Foreign Issuer structures that helped raise a substantial amount of funds for transactions.

Silvercorp Metals Inc. announced the appointment of David Kong as a director of the company. From 1981 to 2004, Kong was partner at Ellis Foster Chartered Accountants and a partner at Ernst & Young LLP from 2005 to 2010. Currently, Kong is a director of New Pacific Metals Corp., Hana Mining Ltd., Channel Resources Ltd., Uranium Energy Corp., and Brazil Resources Inc.

Tyhee Gold Corp. , which has been trading near a year low 9 cents. reported today the final results from its 10,000 meter diamond drill program at Clan Lake. The company said results include CL209, which had an exceptional 885 gram per tonne gold intercept within a 20 meter wide mineralized zone grading 24.71 gpt (uncut). Dr. Dave Webb, President and CEO, said "The results show that the Main Zone continues to be open to the southeast, while drilling a gap within the Main Zone returned very good numbers including a short interval that was close to 0.1 per cent gold (885 gpt)."

Canacol Energy Ltd. , which ended Friday's session just 8 cents above year low $0.53, announced today that its offer to acquire all of the outstanding shares of Carrao Energy Ltd. has expired with approximately 97 per cent of the Carrao shareholders tendering. The company said a total of 115.9 million Carrao common shares or more than 90 per cent have been validly deposited to the offer.

Redstar Gold Corp. , with shares were nearing 20-day and 50-day averages at Friday's close, announced today the results from recent drilling on the Unga project in Alaska. The company said highlights from the drilling returned wide zones of gold mineralization, 21 meters of 4.02 g/t gold that also included bonanza grade intervals of 1.0 meter of 43.90 g/t gold. Scott Weekes, President of Redstar, said "Our results have confirmed the presence of an extremely rich high-grade vein system, and we are also impressed with the discovery of wide zones of near surface gold-silver mineralization."

Laser technology company Theralase Technologies Inc. announced today its third-quarter 2011 financials. The company said its revenue remained relatively constant year over year with total revenue for the three-month period ending Sept. 30, 2011 at $453,212, compared to $424,879 for the same period in 2010, an increase of 6.7 per cent. It ended the quarter, however, with a net loss of $423,929.

OSI Geospatial Inc. , a leader in naval navigation and tactical solutions, announced today the release of ECPINS 6.0 for Warships and Submarines, and the fleet-wide deployment by the Royal Navy. The company said ECPINS 6.0 delivers the most advanced navigation and tactical capabilities for surface and subsurface naval operations. The U.K. Royal Navy will be the first customer to upgrade to ECPINS 6.0, the company added. Its shares closed Friday at year lows. 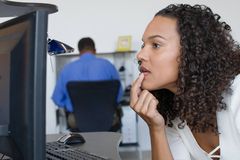