Donald Trump's policy on trade since becoming U.S. president has been all about putting "America First." But in one corner of the commodity world, his actions are having the opposite effect.

In a move intended to protect the domestic lumber industry, the U.S. this year slapped duties of as much as 31 per cent on imports of timber from Canada, which supplies more than a quarter of what American builders use each year. Prices surged, increasing costs for American buyers -- and boosting profit for Canadian producers.

Shares of Canadian softwood lumber producers Canfor Corp. and West Fraser Timber Co. are outperforming their American peers with gains of more than 40 per cent this year, placing them among the top performers on the BI Global Paper and Wood Products Index. By contrast, shares of U.S. rival Weyerhaeuser Co. are up about 10 per cent.

Lumber futures jumped 16 per cent in 2017 as U.S. trade limits and western wildfires spark concerns over limited supplies, just as communities in Texas and Florida begin to rebuild after devastating hurricanes in the past month. That means more gains ahead for Canfor and West Fraser, which have more exposure to softwood-lumber prices than their American peers, including Weyerhaeuser and Potlatch Corp., according to Christoph Butz, a senior investment manager of timber funds at Pictet Asset Management in Geneva.

"There is no way lumber prices can nosedive," said Mr. Butz, whose firm is one of the largest shareholders of Vancouver-based Canfor. Canadian producers "have a much stronger direct exposure, since that is really the bulk of the business," he said.

Disputes between the countries over softwood lumber have caused intermittent friction for years. Canada's share of the U.S. lumber market averaged 28 percent under a previous trade agreement, Joshua Zaret, a Bloomberg Intelligence analyst, said in a March report, citing data from the Congressional Research Service.

"This is a strong market," said Mr. Zaret. "If it were a weak market, they wouldn't be able to push through prices, and they'd have to eat the tariffs."

The U.S. tariffs sent lumber prices surging at a time when demand from home builders was already strong,  Mr. Butz said. While the lion's share of the Canadian producers' business is directly linked to lumber, the American companies have more investments in private U.S. timberlands and mills in the nation's south, where log prices haven't increased as much, he said.

"Prices have gone up, and the U.S. market has absorbed the prices," said Philippe Couillard, the premier of Quebec, Canada's second-largest lumber-exporting province. In Canada, "not a single worker has been laid off, not a single plant has been closed," Mr. Couillard said in an Sept. 18 interview. "So the people suffering from this battle are the U.S. consumer and the people wanting to build their homes or renovate their homes."

The trade dispute pushed up material costs for house builders in the U.S. by 20 per cent, Jerry Howard, chief executive officer of the National Association of Home Builders, said last month.

On the Chicago Mercantile Exchange, lumber futures are up 25 per cent over the past 12 months to $381.80 per 1,000 board feet. Prices have room to keep climbing, said Kevin Mason, managing director of Vancouver-based ERA Forest Products Research. Lumber could reach $400 over the next month if mills start running low on logs after wildfires in some key forest areas, Mason said.

Wildfires in western parts of Canada, along with some in the U.S., are threatening tree supplies and have prompted limitations on log harvesting, Mason said. An infestation of the mountain pine beetle also has eaten away at timber in British Columbia, the world's biggest exporter of softwood lumber.

Output threats can become a bit of a double-edged sword for Canada's producers. On the one hand, they're likely to keep lumber prices high. But wildfires and pests also could hurt sales and impede the ability of companies to deliver large volumes. That could mean a boost for other global suppliers.

"All that lumber needs to come from somewhere," Butz of Pictet Funds said.

Stress at UN not shared on Wall Street as stocks set records
September 20, 2017 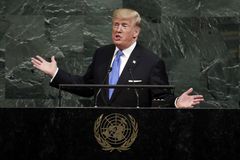 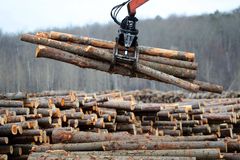