Some companies don't toy around when it comes to raising dividends.

Mattel Inc. and Hasbro Inc., the world's No. 1 and No. 2 toy makers, respectively, both posted fourth-quarter results and announced substantial dividend hikes recently.

These stocks have several things in common – including similar dividend yields and valuations – but there are some key differences to consider before you decide to play with either one.

Mattel is a hit on Wall Street: 10 of 14 analysts who follow the company rate it a "buy," with four "holds" and no "sells." The stock has been on a roll, gaining about 27 per cent in the past year, excluding dividends.

In the fourth quarter, sales rose 1.4 per cent to $2.15-billion and earnings jumped 20.2 per cent to $1.07 a share, a better-than-expected result driven by higher gross margins and strength in products such as Barbie, Hot Wheels, Monster High and Disney Princess. This was offset by weakness in Fisher-Price, whose licence to produce Sesame Street products expired and was picked up by Hasbro.

Faced with rising raw materials costs, Mattel has hiked prices to protect its margins. The company raised its quarterly dividend by 35 per cent, to 31 cents a share – a strong vote of confidence from management that was echoed by analysts.

Mr. Johnson hiked his price target to $38 (from $33), for an implied price-earnings ratio (P/E) of 13 based on his 2013 earnings estimate of $2.90 a share. "We think this valuation is in no way a stretch, given that the multiple is slightly below the company's historical average of 14-15 times and we expect EPS growth of about 15 per cent in each of the next two years," he said.

His estimate is "conservative," he added, given that Mattel is poised to generate growth from its acquisition last fall of HIT Entertainment, whose pre-school brands include Thomas & Friends, Barney and Bob the Builder. What's more, the core Hot Wheels brand is firing on all cylinders, with sales up 11 per cent in the fourth quarter, while Barbie sales jumped 6 per cent.

Hasbro's stock isn't having nearly as much fun, tumbling about 20 per cent in the past year amid falling sales of board games such as Monopoly, Clue and Scrabble. Weakness was especially pronounced in North America after the U.S. Thanksgiving Day holiday, but international growth helped to pick up the slack.

For the crucial fourth quarter, revenue rose 4 per cent to $1.33-billion and earnings per share increased 7 per cent to $1.06. Hasbro actually made slightly less money in the quarter compared with a year earlier, but per-share earnings rose because it repurchased 10.5 million shares during 2011 at a cost of $423-million.

Given the weakness in games and puzzles, analysts are cautious on Hasbro, with six "buys" and seven "holds." Revenue in the games division plunged 11 per cent in the fourth quarter – the fifth consecutive decline. The company is reinventing many of its classic games – Monopoly Electronic Banking is one example – and hopes to "stabilize" the business in 2012, but analysts worry that a secular shift is under way.

"We believe the stock could remain a 'show-me' story until the company demonstrates that it has reached an inflection point," Barclays Capital analyst Felicia Hendrix said in a note. She has the equivalent of a "hold" on the shares.

Still, the company boosted its quarterly dividend by 20 per cent to 36 cents a share – its the third consecutive annual increase – citing its "proven track record of healthy cash generation and effective capital management."

At the heart of Hasbro's growth strategy are its iconic brands, which it licenses to create new sources of revenue. You can play Scrabble and Monopoly on your iPhone, for instance, or see Transformers action figures come to life on the big screen. Films inspired by Hasbro brands Battleship and G.I. Joe are slated for release this spring, and others based on Candyland, Stretch Armstrong and Risk are also in the works.

Apart from selling movie-related merchandise tied to its own brands, Hasbro also has the rights to make toys based on Marvel characters such as Spider-Man and Captain America.

Conclusion: Mattel appears to have a more predictable future, which is reflected in its larger dividend hike and higher P/E. Hasbro's dependence on board games is holding it back and its turnaround strategy is still a work in progress, but there may be more upside if the company can prove the doubters wrong. 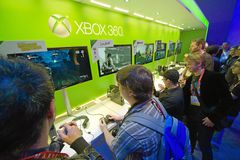