Among Valeant Pharmaceuticals International Inc.'s vocal detractors, short seller Andrew Left of Citron Research played a big role in its almost 90-per-cent plunge. While the drug maker's rocky few months stung investors, they have been something less than a triumph for Mr. Left's bearish brethren.

Short interest as a percentage of shares in the Laval, Que.-based company sits below 5 per cent, taking into account U.S. and Canadian markets, according to data from research firm Markit Ltd. That's a lower level of entrenched bearishness than in 29 of the 42 companies in the Russell 3000 Index with a market value of $1-billion or more whose stock has at least halved since Aug. 5. They have an average short interest of 11 per cent.

Bets against Valeant have remained relatively low even as it became a political punching bag for drug prices and a target of public attacks from Citron and others. According to Mr. Left, that's because the plunge in the stock was so fast that on the occasion traders were willing to venture a bet, it was usually that the stock would rebound.

"You had all these big names in the stock, and when it goes from $250 to $140 or whatever you get a lot more people thinking it's time to buy than it is to sell,"Mr. Left said in a phone interview. Valeant fell 2.5 per cent to $27.40 at 12:18 p.m. in New York, after tumbling to a five-year low last week. "People tried to find floors at $90, $80, but it sold so fast. The lack of short interest helped it fall faster -- that's what made this such a great story, that it wasn't a heavily shorted name."

Since the end of February, Valeant has delayed filing its annual report pending an internal investigation by an ad hoc committee, disclosed a Securities and Exchange Commission probe and said it would restate several quarters worth of results. Last month alone, the U.S. shares plunged a record 60 per cent. Amid a board and management shakeup announced March 21, the drugmaker said Chief Executive Officer Mike Pearson will step down.

Still, even though the Canadian stock has seen a pickup in bearish wagers in the last couple of weeks, Valeant remains inexpensive to short, according to Simon Colvin, an analyst at Markit in London. The fee to borrow the shares is below 1 per cent on an annualized basis, which is within the average, he said.

"We haven't seen the big consensus on the short side that other similar companies see when they go through similar crises," Mr. Colvin said. "There's still plenty of availability to borrow the stock."

Perhaps short sellers are wary of companies with heavy influence from activists, especially big name investors like Bill Ackman? He's among Valeant's biggest shareholders and his Pershing Square Capital Management LP got two seats on the board last month.

Renee Soto, an outside spokeswoman for Valeant with Sard Verbinnen & Co., didn't respond to requests for comment on the short interest.

It's also hard to tell whether traders are concerned about a debt default. Even as the bonds have followed a similar trajectory to the shares, Valeant isn't among the top 1,000 entities tracked by the Depository Trust & Clearing Corp., which runs a central registry for the credit-default swaps market.

Nor does the options market offer more clues. While volume in the contracts has soared, trading has been high for both bullish and bearish wagers. 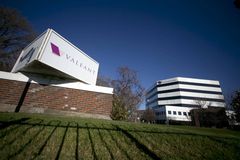