Just wondering if you had any insights into Innergex? I'm holding 850 shares and I'm looking to free up some capital and was thinking of selling these, unless there is some hopeful indication that they will be on the climb soon.

Thanks for the assignment. Innergex Renewable Energy Inc. has been in business since 1990 and is totally committed to renewable power, including run-of-river hydro, wind farms and solar arrays. They have 33 operating facilities with five more in development.

Their facilities are located in British Columbia, Quebec, Ontario, and Idaho. The majority of the generating capacity is located in British Columbia with 48 per cent and Quebec with 41 per cent. Hydro represents 71 per cent of power generated by the company, wind 21 per cent, and solar 7 per cent. INE enjoys dependable cash flow from the quality of its assets and the long-term nature of the contracts for its output.

On April 30, Tesla is expected to reveal its plans for an industrial battery that will allow electrical power producers to store output until needed. At this point, there isn't enough information to determine the economics of the device. If the storage is sufficiently robust, it could provide a lift to the renewable energy sector which has been challenged in matching production with demand.

An exploration of the charts will provide further particulars to consider. 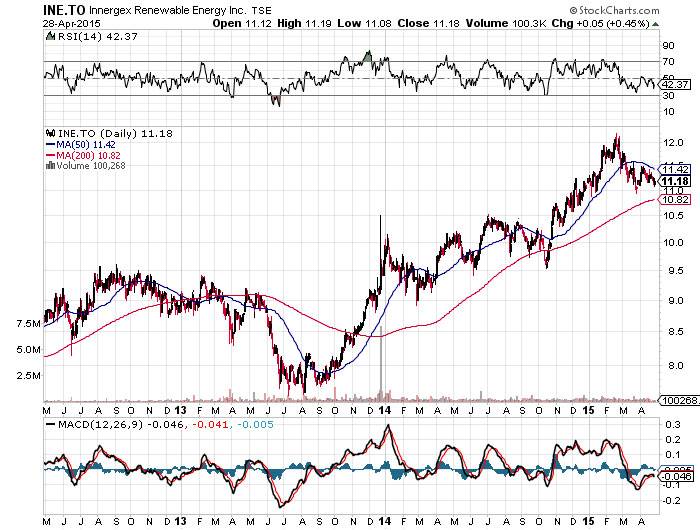 The three-year chart outlines the uptrend that started in the June of 2013 when the moving average convergence/divergence (MACD) and the relative strength index (RSI) generated buy signals. The shares broke above the 50-day moving average in September and then the 200-day moving average by November. In early December, a golden cross surfaced, informing knowledgeable investors that the advance had more in it.

INE ran to a 52-week high of $1236 by February of 2015, producing a sweet capital gain and income from dividends which today yield 5.55 per cent. The MACD and the RSI both turned lower as the stock began to pullback from the highs. 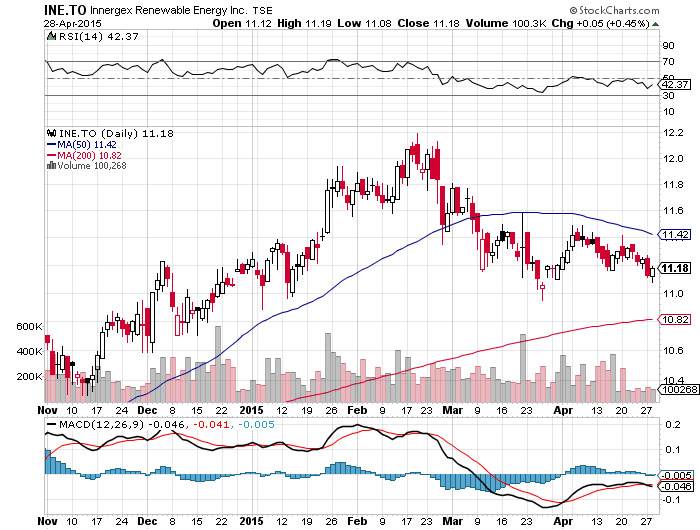 The six-month chart highlights the sell signal generated by the momentum indicators in February and the breach of support along the uptrend line. The stock has been testing support in the $11 range since March while meeting resistance along the 50-day moving average. The next flex point for INE will be the release of Q1 results on May 14. The shares have breached the 50-day and even the 200-day moving average during the course of the advance only to move higher. How the shares trend after the Tesla announcement and the release of Q1 will help you determine how to proceed.

Next time, I will study the case for Premium Brands Holdings Corp. for Doug.