Investors looking for a Canadian resource play with a rich dividend are eyeing machinery company Wajax Corp., but analysts are cautious on its near-term growth.

A slump in the mining sector and cost cuts in the oil and gas industry are behind the Mississauga-based company's flat performance over the past year.

Wajax sells and services industrial parts and equipment, from dump trucks to hydraulic pumps, across sectors such as resources, construction and transportation, through 125 branches across Canada.

While investors like Wajax's 6.6-per-cent dividend yield and see growth picking up in 2015, most analysts recommend they wait for better results.

"Although we believe that Wajax's longer-term prospects are favourable, we prefer to wait for a clearer indication of improved end-market demand or a more compelling valuation before becoming more constructive on the name," TD Securities analyst Michael Tupholme said in a recent note.

He's one of six analysts that have a "hold" or equivalent rating on Wajax stock, while three say "buy," according to S&P Capital IQ. The consensus 12-month target price is $39.08, which is not far from its current price, just below $37. The shares hit a 52-week high of $39.56 earlier this month, but are still well below the $50 range where it traded in the spring of 2012. The stock then began to sink, alongside the fortunes of the resource sector in Canada.

Wajax shares fell below $30 last June, after the company cut its monthly dividend by 7 cents a share to 20 cents.

The dividend is still higher than what's being offered by similar companies such as Finning International Inc., Toromont Industries Ltd. and Rocky Mountain Dealerships Inc.

"For those that like yield and like income, we definitely point to this stock as a relative high yield play on the sector," M Partners analyst Tom Varesh said in an interview. He has a "buy" on the stock and a $40.75 price target.

But some analysts warn the dividend could be cut further to help the company repay debt and free up funds for acquisitions that could fuel growth.

"We believe a dividend cut would be viewed as prudent by institutional shareholders given the soft outlook for WJX markets," Sara O'Brien of RBC Dominion Securities said in a note, referring to the company's stock symbol. "Shares may react positively to a dividend cut given the financial flexibility it would accord … for growth initiatives."

Still, she has a "sector perform" rating on the stock, calling its existing growth outlook "flat to challenged."

Wajax said recently it expects more weakness in its business this year, similar to last year, citing belt tightening in the oil and gas and mining industries.

The slowdown in the resources sector has been rough in particular for the company's power systems and industrial components divisions, which together make up about half of its revenues. Power systems include engines and generators, while industrial components include parts and bearings. The rest of its revenue are from equipment sales, such as shovels and excavators. Some of its vendors include Hitachi and Timken.

About 53 per cent of Wajax's revenue comes from Western Canada, 27 per cent from Quebec and the Atlantic provinces and 20 per cent from Ontario.

Stan Wong, director of wealth management and portfolio manager at Scotia McLeod, said he doesn't own the stock in his funds in part because of its Canadian focus.

"In other parts of the world, economically speaking, the data is getting better faster than in Canada," Mr. Wong said.

Raymond James analyst Ben Cherniavsky said in a note that he believes Wajax's earnings will suffer this year, but that the dividend is "likely" safe. He sees improvements in the company's outlook next year, driven in part by recovering oil and gas markets, and emerging opportunities in the liquefied natural gas sector in Western Canada. He recently increased his price target to $38.50, but kept his "hold" rating. 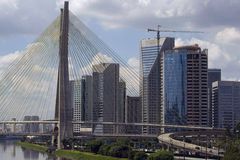