Shares of Amazon.com Inc. spiked in the after-hours session on Thursday, with the firm reporting a surprising third-quarter profit on better than anticipated sales.

The more than double-digit gains propelled Jeff Bezos, chief executive officer of the e-commerce and cloud computing company, to third on the list of America's richest people.

The strength of Amazon's quarterly results can be judged not only by the jump in Mr. Bezos's net worth, but also by the effusive praise these numbers inspired.

Commentary from analysts show that they believe the company's performance and growth prospects are robust, as well as increased faith that Mr. Bezos's intense expansion plans, which crimped on profitability in the past, will continue to bear fruit going forward:

"Amazon's 3Q results reinforce our view that the company's business is inflecting around the globe as YoY ex FX revenue growth in all 4 of its main retail segments accelerated...for the 3rd straight quarter. Retail gross profit dollars per customer – which we view as a proxy for retail same store sales – accelerated to 27% growth...the fastest growth in company history and 2.5X higher than the long-term ~11% average rate… In effect, we see AMZN's accelerating SSS growth leading to a period of sustained, rising profitability."

"Winning in All Facets of the Game.We believe the company has emerged from its recent investment cycle well-positioned to extend its competitive advantages through the Prime platform, enhanced logistics and AWS services. The rapid adoption in Prime membership has been a boost to NA retail and is in the early stages of driving international retail… Overall we believe this quarter's results indicate that Amazon has reached a critical level of scale which allows it to build a robust global ecosystem while maintaining profitable top-line growth."

"We do not expect investment spending to abate, especially in Prime and AWS, but believe the company has proven that profits can be realized regardless. We expect AMZN to simultaneously focus on cost reduction and efficiency, and believe that continued strong revenue growth (~20% in FY15-17) will support the profit equation."

"Although margin outperformance was the center of attention, Amazon's core retail business out performed expectations as well, led by continuing acceleration of International revenue and aided by Prime. Both North American and International EGM growth, on an fxneutral basis, have accelerated in each quarter this year, with EGM now comprising 79% of North American Revenues and 71% of International Revenues."

"After speculation for about 1.5 years that Amazon might in- source last-mile fulfillment, it seems the company is getting serious about this. According to media reports, Amazon has hired an executive search firm to build a management team to lead the effort. We believe this is Amazon's next major step in its evolving fulfillment strategy which is focused on reducing friction for shoppers by offering better selection, product availability, & high service levels…As the company enables a mix of all these expedited delivery services into the top 50 US markets, traditional retailers with slower and more expensive shipping options should be feeling increasing pressure and start losing market share."

Macquarie's Ben Schachter (Outperform, Price target to $740 from from $660)

"The bottom line is that AMZN continues to deliver against the long-term bull thesis: increasing share, rising margins. Finally, something notable this earnings season thus far is that EBAY, AMZN, and GOOG have all highlighted growth in India (AMZN has tripled fulfilment capacity y/y). While not quantified, these companies are all seeing an uptick meaningful enough to highlight."

"Retail is charging into 4Q with 75m+ prime members globally (DB est). We think shares can drift higher in the near-term, but admittedly are due a breather as margins level out a bit in 2016, which we don't think will come as a surprise…Try as we might, we struggle finding anything to nitpick. The obvious point would be that 4Q guidance was below Consensus, but this was largely expected by the buy side." 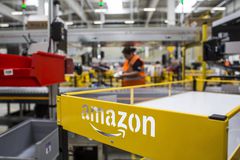