Wealthsimple founder Michael Katchen was barely a teenager when he discovered the ups and downs of investing.

His first major win was a stock-picking contest he entered with his dad in 1999, at the age of 12. He put the entire $100,000 of play money into a now defunct company called MGI Software Corp., which soared 260 per cent during the eight-week contest period. Mr. Katchen won a free trip to Whistler, B.C., with his dad, and then decided to buy a few shares of MGI in real life. Two years later, the stock tanked amid the dot-com bust and was sold at a more than 90-per-cent discount to what Mr. Katchen had paid.

The 28-year-old has been a self-described "boring" investor ever since, making diversification key to his investment strategy. The Globe and Mail spoke with Mr. Katchen recently about his portfolio and the philosophy behind online portfolio Wealthsimple.

My dad started his career as a stockbroker and has seen many market cycles come and go. My sister was also in the investment world. I was around it a lot and always found it exciting and interesting.

What investments did you have before starting Wealthsimple?

I took advantage of my [former] company's RRSP program. I started my career at McKinsey & Co. They had an RRSP with Sun Life and some pretty high-fee mutual funds. It was the only option available, but you got the company match, so it made a lot of sense. In my own portfolio, it was index funds. For a long time I basically copied [author and investor] David Swenson's model, which is U.S. securities and some Canadian. Broad indexes that cover things like real estate investment trusts, emerging markets, TIPS [Treasury inflation-protected bonds] and then Treasury bonds. Those were my core portfolio for a number of years before we started Wealthsimple, and I have since developed a more broad perspective.

Are there certain sectors that you favour over others?

My portfolio today is Wealthsimple and our philosophy is that broad asset allocation is the right way to invest long term. We don't try to place bets on any sectors. We aren't overindexing to technology or commodities. In Canada, you have to actually work hard so you don't overindex the commodities. We have some Canadian equities, a North American bond and North American real estate as well as emerging markets and foreign developed markets. It's a really global and a really boring and passive approach to investing.

How do you describe yourself as an investor?

In my case, as a young investor, I'm in the highest risk category we have. I'm overindexed to equities compared to a more conservative investor in our portfolio. The highest we go is 70-per-cent equities. Still, I'm fairly conservative in my investments. To me, it's not about being risky or conservative, but being thoughtful. Unlike a lot of young Canadians these days, I don't plan to buy a condo or a home – at least not any time soon. Most people at a young age tie up a huge amount of their net wealth in a single real estate property. To me, that doesn't make any sense. If you love real estate as an investment, why not buy a REIT and spread it across different types of assets?

You're a renter. Do you plan to buy a home in the future?

I'm a huge outdoorsman. My dream is to have a huge lakefront home or cottage some day. But to me, that's money I'm throwing away. It's to have a home for decades to come, not because I think buying it would be a great investment.

What has been your worst investing move to date?

The MGI Software stock, which I bought for about $25 and the company was sold at $1.18. I also got a couple of Ballard shares for my birthday, when it was trading around $200, then decided to buy one more share for myself. I was 13 years old at the time, so it was a huge investment. That also collapsed to almost nothing. That's what exposed me to the risk of investing in single stocks. I learned to be critical about investments. What has been the best move? I invested in my company, Wealthsimple. I was the first investor, in 2014, and have been fortunate that the business is growing exceptionally fast.

For this series, a high-net-worth investor has investable assets of more than $750,000.

How this high-net-worth venture capitalist is investing his money
November 15, 2015 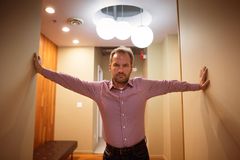 How the chairman of Stockhouse is investing his money
November 1, 2015
How the CEO of Match Marketing Group is investing his money
October 18, 2015
Follow Brenda Bouw on Twitter @BrendaBouw
Report an error Editorial code of conduct
Due to technical reasons, we have temporarily removed commenting from our articles. We hope to have this fixed soon. Thank you for your patience. If you are looking to give feedback on our new site, please send it along to feedback@globeandmail.com. If you want to write a letter to the editor, please forward to letters@globeandmail.com.
Comments