The resignation of Gary Cohn as top White House economic adviser roiled markets Wednesday, sending the dollar down against the yen and U.S. stock futures lower. While global equities recovered from a trade-induced blow last week, graver concerns are emerging.

The White House said late Wednesday that Cohn is leaving his post, a move that followed his apparent loss in a battle to halt U.S. tariffs on aluminum and steel. A separate report showed President Donald Trump's administration is considering imposing tariffs on a broad range of Chinese imports for its alleged theft of intellectual property – a further sign of protectionist advocates' influence on the agenda.

The following are a selection of comments from analysts and investors:

Paul Donovan, chief economist at UBS Wealth Management: "The departure signals the defeat of anti-protectionism, or reduces the influence of anti-protectionism." "Any tax on trade, in any country, means consumers are going to be purchasing goods they would not chose to buy, at prices that are higher than they should have to pay, to subsidize less efficient companies."

Peter Boockvar, chief investment officer of Bleakley Financial Group: "From a major policy perspective, the heavy lifting was done via the tax bill. A limit on regulatory reform will continue regardless of Cohn's presence. Thus, the only thing left of importance for Cohn in my view was him being a firewall against dumb and damaging economic initiatives. Tariffs qualified as such."

Tim Ash, a senior emerging market strategist at BlueBay Asset Management LLC in London: "Something seems to have changed Trump's decision set – perhaps that is the ever tightening net from the Mueller Russia inquiry with Jared's increasing difficulties and the departure of Hope Hicks. Perhaps what we saw with the steel/aluminium tariff announcement last week was another attempt by Trump to deflect attention from problems within the White House, and Mueller."

Michael O'Rourke, chief market strategist at JonesTrading Institutional Services: "Of all the Trump administration resignations, this will be the one most meaningful for markets."

"Cohn was the administration official financial markets had the most confidence in. This opens the environment up to whole new wave of uncertainty. The likelihood of a trade war just jumped dramatically."

Rabobank strategists led by Richard McGuire: "We would challenge the oft-cited view that protectionism is bearish for USTs as it promises higher import costs (and, thus, inflation) while also portending a possible divesture of U.S. debt by China in retaliation." "We would instead argue that higher import costs, in representing a negative supply shock will ultimately weigh on demand. Tit-for-tat trade measures, meanwhile, point to lower world trade volumes which, in turn, promises lower global growth."

Ben Emons, chief economist at Intellectus Partners LLC: "Not only countries may retaliate, reciprocal trade is not a 1 for 1 trade, especially when tariffs are placed on high quality/low cost foreign goods that are a benefit to the domestic consumer." "The favorable global synchronization theme from 2017 is morphing into a de-synchronizing theme that can impact markets negatively."

James Soutter, a fund manager at K2 Asset Management Ltd. in Melbourne: "Markets will see this as another negative in the Trump presidency and will move lower on the news in the short term, but this doesn't have an impact on the broader earnings growth story that equities are experiencing."

Alan Patricof, a venture capitalist and managing director of Greycroft LLC who had backed Hillary Clinton against Trump, said: "We need a grown up in the White House, that's the problem, and it gets worse every day," with the latest news indicating "more chaos."

"The market doesn't like uncertainty, the market doesn't like surprises. All we've gotten for the last 15 months is surprises, and yet the market went up. At some point the market has got to be spooked by the fact that they just don't know what's going to happen tomorrow." "I feel it so many times – I Tweet it myself – this is it we've hit the inflection point. But "the market defies me, then we get another crazy move." But this time, "Gary Cohn has been a grown up in the White House, and now he's gone."

Terry Haines, a managing director at Evercore ISI: The narrative will be that protectionists "will be in the ascendant" and Treasury Secretary Steven Mnuchin, "the lone remaining 'free trader,' will be in eclipse." Even so, "there is more bark than bite in the Trump protectionist story line of the last few days." "Investors should understand the Cohn departure as the end of his influence in a difficult White House, but not to overreact to it."

Michael McCarthy, Sydney-based chief strategist at CMC Markets Asia Pacific Pty. "It's clear at the moment the markets are likely to price the worst-case scenario on tariffs." "Markets are very concerned about the impact on global growth," given the "potential for tit-for-tat" protectionist moves in the wake of Europe's retaliation threat following the move on U.S. steel and aluminum tariffs. "Higher interest rates could be off the table if this does escalate." An important signal for markets is still pending -- the exact scope of the steel and aluminum tariffs, with the potential that exclusions and exceptions diminish the impact.

Johan Jooste, chief investment officer at Bank of Singapore Ltd.: "The really important next thing is how do other countries react to this. If the response is fairly brutal, if it's really strong, without Cohn there you'd imagine the White House reacts in kind. Then we get into the kind of thing the market is probably now starting to discount as a greater probability, which is not a good outcome for stocks."

Nader Naeimi, head of dynamic markets at AMP Capital Investors Ltd.: "I view this as grandstanding behavior by Mr. Trump, with the aim to have more negotiating cards in his deck." "In markets, we are closer to a durable low than we were after the first leg down in markets in early February." 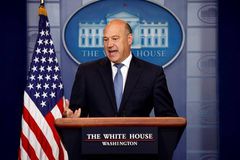