Skip to main content
Brooke Thackray
Special to The Globe and Mail
Published May 5, 2016

This week, the fund I help manage exited 90 per cent of its equity positions.

To some, the market adage of "sell in May and go away" might sound like an old market wives' tale, but based on recurring seasonal trends since 1950, the data speaks for itself: stocks do better in the winter months than in the summer months. This is why the Horizons Seasonal Rotation ETF (HAC), which uses a Seasonal Rotation strategy I developed, has almost exited equities entirely.

Remember, at this point, it's not that the S&P 500 has technically broken down — it's close to its all-time end of day high, set at 2,131 last May. The S&P 500 has been consolidating in the 2,100 area since late 2014. Given the length of consolidation, a strong catalyst is needed to move the stock market substantially higher. In my view, that strong catalyst does not currently exist.

While the labour market in the U.S. has been improving, U.S. GDP growth continues to be anemic (the latest March results came in at 0.5 per cent). Globally, both the IMF and the World Bank have reduced their growth forecasts, with the World Bank reducing its forecast to 2.5 per cent from 2.9 per cent. The low U.S. and global growth rates are not harbingers of a strongly advancing stock market.

The best time to buy stocks is when they are cheap. Stocks are currently anything but cheap. The current S&P 500 forward P/E ratio is 24.12 and the current trailing twelve month P/E ratio is 17.7, according to Birinyi Associates. Compared to historical norms, both of these ratios are above average, making the stock market an expensive proposition. Stocks can continue to rise when they are trading at rich levels, but subsequent returns can be weaker and when a summer correction takes effect, it could be more severe.

Exiting the equity market now does not mean it's time to go fishing and put your assets into cash for the next six months. There are still seasonal opportunities in the summer months, but investors have to be selective and tactical.

U.S. and Canadian government bonds tend to perform well from May until the beginning of October, with the sweet spot of the seasonal trade occurring in August and September. HAC has taken an initial allocation in government bonds on both sides of the border. Summer also gives way to some short-term seasonal equity opportunities in gold, utilities, health care, agriculture and consumer staples.

Hopefully, this column hasn't justified a portfolio's summer getaway. Rather, the need for investors to recognize historically the summer months are a period of turbulence. Returns can be positive, but there is a far greater likelihood of seeing losses from a seasonal perspective. Knowing that, the question then is: why chance it? 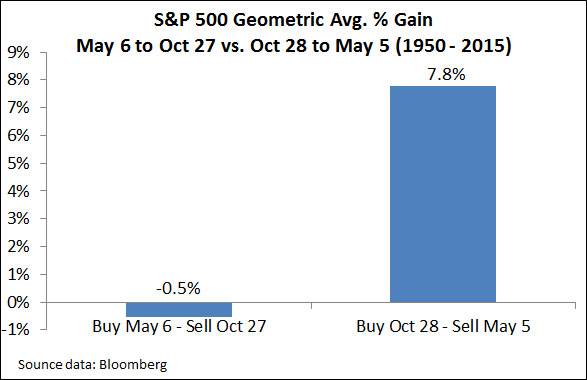