There will be no relief any time soon from gold's worst losing streak in almost two decades, according to the most accurate forecaster for precious metals.

After sliding about 1 per cent since December, prices will drop an additional 10 per cent by the end of 2015, reaching $1,050 (U.S.) an ounce – a five-year low – predicts Barnabas Gan, an economist at Oversea-Chinese Banking Corp. in Singapore.

Mr. Gan topped 19 of his peers from banks including Standard Chartered PLC and ABN Amro Bank NV to become the most accurate analyst over the past two years, Bloomberg Rankings show.

Gold has fallen for four straight quarters, the longest stretch since 1997. It has been more than two years of disappointment for bulls who had been piling into exchange-traded products (ETPs) backed by the metal, accumulating a record hoard by the end of 2012. Since then, more than $81.8-billion has been wiped from the value of the ETPs backed by bullion.

Mr. Gan, 33, expects bullion to keep falling because of the U.S. Federal Reserve's plan to boost American interest rates. Higher rates drive up the U.S. dollar, curbing gold's appeal as an alternative. The metal also doesn't pay interest, unlike competing assets, and low inflation means there's less need for the commodity as a store of value, he said.

"The expectations for a rate hike this year are making the dollar firmer, and a firmer dollar is likely to be a significant drag on gold prices," Mr. Gan said by telephone. He has been following the market for the past five years.

The metal has tumbled almost 40 per cent since reaching a record high in September, 2011, when global central banks unleashed unprecedented economic stimulus that fanned concern the cost of goods would surge. Bullion prices have been trapped in a bear market for the past two years as inflation failed to accelerate, while U.S. equities rose to records and the dollar surged.

Mr. Gan isn't alone in predicting more declines. Goldman Sachs Group Inc. analysts reiterated in a May report that they expect prices to retreat to $1,050 in 12 months. Société Générale SA predicts the metal will reach that level by the fourth quarter of this year, according to a June 26 report.

Not everyone is bearish. The 31 gold analysts tracked by Bloomberg see prices at $1,212 in the fourth quarter, on average. The estimates ranged from $1,025 to $1,400. ABN Amro was the most bearish, while the highest estimate was from Thorsten Proettel, a commodity analyst at Landesbank Baden-Wuerttemberg in Stuttgart, Germany.

Investors have been adding to holdings as Greece's debt crisis boosted demand for haven assets. Gold in global ETPs rose 6.3 tonnes last week, the most since February. The assets were at 1,592.2 tonnes as of Tuesday.

Spot gold fell 1.5 per cent in June, snapping two months of gains. Prices dropped even after Fed policy-makers signalled that increases for rates would be gradual. The central bank has held its benchmark rate near a record low of 0 per cent since 2008.

Silver will also decline, according to Mr. Gan, who had an average margin of error of 9.2 per cent in his precious-metals outlook over two years as of April 1. His nearest rival, Cailey Barker of Numis Securities, had 9.6 per cent.

Gold will drop to an average of $1,204 in 2015 and to $1,179 in 2016, according to Jens Pederson, a senior analyst at Danske Bank A/S in Copenhagen, who was the most accurate forecaster for gold over the past two years. Immediate-delivery bullion averaged about $1,266 in 2014. Mr. Pederson said he expects the Fed to raise rates twice before the end of the year.

"The risks to our gold forecast are on the downside," Mr. Pederson said in a telephone interview. "Any revisions would be in that direction."

Gold losing its shine – even among coin collectors
June 11, 2015 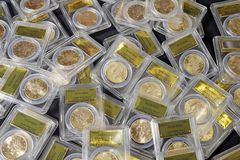 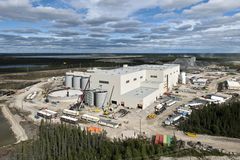