Over the past two decades, investors have had seemingly little patience for an underperforming investment or money manager.

Investors tend to dump the laggard for "something that's doing bette." But an understanding of market cycles and a review of empirical evidence should prompt investors to think twice before falling into this trap.

Once invested, performance is one of the key factors to monitor periodically. Most Canadians' portfolios consist of stocks or bonds selected by an investment manager (either directly or through mutual funds, exchange-traded funds, pooled funds and other investment options). And dumping the laggards of the past few years to buy the stronger performers is more likely to erode – not boost – performance.

First, the logical case against this tendency. Financial markets move in cycles. Even when longer-term trends hold – for example, stocks outpace bonds over time – there are always shorter or medium0term periods where the opposite occurs. The tendency of asset prices to return to their long-term trends is referred to as "mean reversion." And when stocks are falling hard in a bear market, fundamentals usually imply higher future returns for stocks – even when the recent past suggests otherwise.

In other words, investors should add to – not sell – investments that are far underperforming the return implied by underlying fundamentals.

And there is empirical evidence for investors to avoid this value-detracting behaviour.

There isn't a great deal of research on this topic, but there are two good pieces of evidence.

The Employee Benefit Research Institute ("EBRI") found that investment consultants hired to select managers for pensions and other institutional portfolios have a poor record when it comes to changing managers. The chart below shows that consultants fired managers when they had weak performance over the prior one, two, and three years. And they were replaced by managers with much stronger returns over the same trailing time periods. 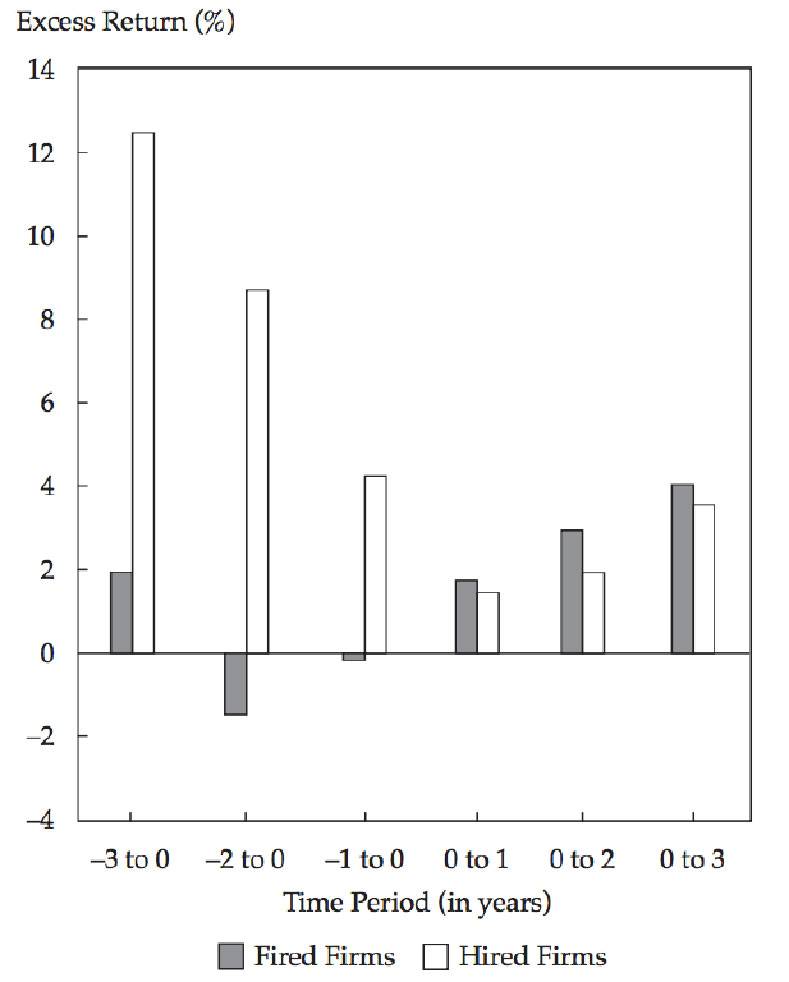 This more informed group of investment consultants has long made the same behavioural mistakes observed in individual investors. It's striking – though not surprising – that fired managers tended to outperform their replacements one, two, and three years later. This is the result of investment consultants' preoccupation with rolling 4-year performance metrics – likely because that's roughly the historical length of the average business cycle.

That sounds good on the surface until you realize that business cycles and market cycles are not the same. And end-date bias – measuring performance at a low point – can make the best managers look awful if focused on metrics at a single point in time.

The first academic paper I read on this topic was The Selection and Termination of Investment Management Firms by Plan Sponsors (By Amit Goyal and Sunil Wahal, Journal of Finance Vol LXIII No. 4, August 2008) which studied hire and fire decisions of 3,400 plan sponsors over a ten-year period. Similar to the EBRI table above, the authors found that hired managers boasted big outperformance in the few years leading up to being hired. But performance was much worse in the years that followed.

Having been aware of this tendency by investors and professionals alike, we always ask ourselves – and each other – whether we're being overly influenced by recent performance when even contemplating a change. Being aware of this behavioural tendency has helped to avoid being lured into poor decisions – most of the time.

Today, bonds are again the focus of such impatient investors – not a surprise in a lengthy bull market. As I wrote recently, many are dumping boring bonds – because of the perceived risk posed by the threat of rising rates – and buying income producing equities to boost income and return potential. I have seen this movie before.

Many clients between 2005 and 2007 voiced complaints about the bonds in their balanced portfolios because they were earning little to nothing while stocks leapt higher. (These same clients changed their tune as stock prices began their Financial Crisis plunge.)

The same holds true for different investment strategies and money managers. I have vivid memories of sticking by value-oriented managers in the late 1990s; and suggesting investors buy plunging stocks and high yield bonds in late 2008.

I have no idea when rates will rise – and when they do, how fast and by how much. Nor do I know when the next bear market will hit stock prices. But I know that a focus on longer-term fundamentals can help to maintain proper focus and maximize the likelihood of fulfilling the purpose that motivated the original investment.