A reader recently sent me the following e-mail:

My wife and I are invested 100 per cent in Canadian bank stocks. We are second-generation to the banks-only strategy: my in-laws have been doing it for 40-plus years. Conventional wisdom says "diversify," but we've done very well with a bank-only portfolio. I'm interested to hear your take on our strategy.

First, I'll look at how banks have performed over the past five-, 10- and 20-year periods relative to the S&P/TSX composite index. Then I'll ask a couple of portfolio managers to weigh in on the subject.

Before we get into the numbers, I should disclose that I personally own all of the Big Five and have been very pleased with their performance. (Just to be clear, I own lots of other stocks as well.) Canadian banks have a unique advantage in that they basically operate an oligopoly, where a small number of players dominate the market.

Because of their scale, they've been able to gobble up market share not only in personal and business lending, but other lucrative areas such as investment banking, wealth management and insurance. Their steady growth has allowed them to post rising earnings and announce regular dividend increases.

Customers may not always love them, but Canadian banks have performed exceptionally well for investors.

For the five years ended Sept. 30, the average annualized total return – including reinvested dividends – was 12.8 per cent for the Big Five. That easily topped the S&P/TSX composite index's total annualized return of 8.6 per cent over the same period, according to data from Bloomberg.

The banks came out well ahead over longer holding periods as well.

The banks have also excelled in the dividend department. To take one example, if you'd bought 100 shares of Royal Bank 20 years ago, you would have initially received $116 in dividends annually. If you held the shares until today – and never bought another share or reinvested a dividend – you would now have 400 shares (thanks to two stock splits) and would be collecting $1,200 in dividends – more than 10 times your original income.

So, is an all-bank portfolio a good idea?

The answer is a categorical "no", according to the portfolio managers I contacted.

"Buying just five companies? That's kind of scary," said Justin Bender, portfolio manager at PWL Capital. "From a risk perspective it doesn't make sense. You're not diversifying. Whether it ends up being a good outcome going forward or a bad outcome, it's still a bad decision starting off."

Canadian banks may be strong and well-regulated, but the 2008-2009 financial crisis showed that "banks do fail. If they can fail in the United States they can fail here, too."

Even some large U.S. banks that were bailed out by the government are still well below their precrisis levels. Citigroup, for example, trades at less than one-tenth of its former high; Bank of America trades for about one-third of its precrisis value.

John Stephenson of Stephenson & Co. Capital Management said an all-bank portfolio is "not the worst idea I've heard of, but close."

"All of your eggs are in one basket. What happens if there is a housing bubble that bursts in Canada? What if growth slows and banks look less attractive? What if U.S. investors short our banks [which they are doing] on the assumption that we will have a housing correction followed by a financial crisis?" he said.

Bottom line: Banks have performed very well over the past 20 years. That outperformance could continue, but there are no guarantees. If the banking sector hits a pothole and the stocks plunge, you may regret that you aren't diversified. 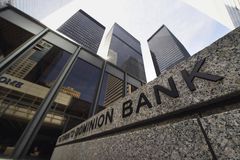