When it seems as though the stock market has lost its mind, big banks and investment firms often turn to one particular psychiatrist: Richard Peterson, managing director at MarketPsych, a firm that applies research from behavioural science to financial markets.

MarketPsych's computer programs attempt to gauge the market's mood by scanning news, Twitter and other social media. The data feed it sells to traders sifts through more than three million articles each day, registering confusion, optimism and fear.

In an interview, Dr. Peterson fielded some questions about the recent market volatility.

How do you explain all the turmoil over the past week?

It has to do with the flow of information. People often respond slowly. So in behaviour finance, there's underreaction where news hits the market and people don't respond right away. And there's overreaction. People collectively say, "Oh my goodness, it's terrible," and sell in a panic.

In July, we changed our outlook to negative, because the news flow was getting negative. It wasn't reflected in the prices. People were underreacting, and that usually happens after a long period of good news. We've had this long run in the stock market for years. People just get complacent.

The news usually doesn't lead people to take action. What does?

The key to what's happening here is how information flow affects human behaviour. How you feel determines what you'll do. I was trained to try and predict people's behaviour. If somebody is in my office and he's upset, I have to decide if he's dangerous to others or dangerous to himself. I have to predict behaviour based on his emotional state and what he says, the information he communicates.

The information people get from the media can influence their emotional state and change what they're likely to do. That's the whole goal of advertising, right? Advertisers aren't stupid. They wouldn't spend all that money on advertising if it was a waste of money. They're driving people's behaviour.

What's the most ridiculous analysis you've heard during this turbulence?

I think a lot of the explanations about China are ridiculous. It's when people pin it on an exact cause. To say it was China not stepping in to save the market on Monday, so of course they had to sell. Oh, that's logical. Why now? Why not six months ago?

It's the accumulation of bad news from multiple places: from the oil sector, from the mining sector, from China. As bad news accumulates, it makes people gradually less likely to take risks. The probability that a small decline will turn into a big decline increases. It's like a forest that hasn't had rain in a while. A few sparks fall on the undergrowth, and they don't start anything. But eventually, the tinder gets so dry, it becomes a conflagration.

Is there anything like this in daily life? When many people hear a fire alarm, they often sit still until other people get out of their seats. You think, 'Maybe I need to take this seriously.'

That's a good analogy. In this case, people know they shouldn't pay attention to the ups and downs of the market. But what makes them pay attention and decide to collectively bail out? Does China really matter all that much? They're slowing down from 7-per-cent-a-year economic growth. Big deal. Falling oil prices are good for everybody.

So how does this get framed as a negative? In conditions of uncertainty, we tend to look to the herd to tell us whether it matters, and the best representation of the herd is prices. People assume the herd knows something important and has better information. The herd knows something they don't. So when the herd starts moving, you think, "I better stick with them, because I'm safe if I'm with the herd."

You usually advise big investment funds. Any advice for the average Joe?

People have to decide if they're going to try and time the market or sit and hold on. If you're going to buy and hold, stop paying attention. Review once a month or once a year. You need to have discipline.

Because if you're always paying attention, you wind up making decisions based on what's happening today, in the heat of the moment?

Right. You wind up reacting. You want to make your decisions in advance. Reacting to the market's price action is probably the worst thing you can do. That's how you get whipsawed. 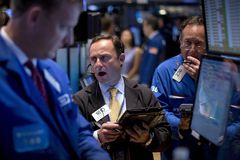