Research In Motion Ltd. leaders Jim Balsillie and Mike Lazaridis are stepping down as executives and co-chairmen of the board in the biggest shakeup in the history of the Waterloo, Ont.-based startup turned global smartphone giant.

The sudden move follows a year of decline in which RIM lost three-quarters of its market value, botched the launch of its PlayBook tablet and watched rivals eat into the BlackBerry's market share. (Mobile readers can click here to follow our live reaction Monday morning.)

Calls for radical change at the company have been mounting in recent months. Its BlackBerry device blazed the trail for smartphones and has 75 million active subscribers around the world, but RIM has struggled of late with dwindling market share and fierce competition from Apple Inc.'s iPhone and an array of devices running Google Inc.'s Android operating system.

The catalyst for change appears to have been the entry of a new personality: reserved but revered investor Prem Watsa, CEO of Fairfax Financial. Mr. Watsa, who has been called Canada's Warren Buffett for his business acumen, has been quietly buying RIM stock for some time. Fairfax is now one of RIM's largest shareholders, and Mr. Watsa is being appointed to the company's board of directors after playing a role in key discussions in recent weeks.

Critics of the company's performance may not be immediately impressed by a management shakeup that involves so little fresh blood. Mr. Heins, a former executive at Siemens, is simply moving up the ranks, while Ms. Stymiest, who once headed stock market operator TSX Group, has been a director since 2007. But RIM's new leadership – including Mr. Watsa, Mr. Heins and Ms. Stymiest – suggested in interviews with The Globe and Mail on Sunday that they are content with the company's strategic direction and products.

"There's no need for me to shake this company up or turn it upside down," Mr. Heins said at RIM's Waterloo headquarters. "We are not at a point where we try to define a strategy. That's done."

Mr. Balsillie and Mr. Lazaridis have been grooming Mr. Heins as a successor for some time and say they decided to act as the company enters a new phase. RIM's newest BlackBerry 7 devices are now out in the market, its PlayBook tablet is receiving a software revamp in February and its next-generation operating system – BlackBerry 10, which is meant to save the company – is launching later this year.

"Jim and I approached the board and we told them that the time is now," Mr. Lazaridis said.

The board agreed, both with that decision and the suggestion from Mr. Balsillie and Mr. Lazaridis that Mr. Heins was the best candidate for the role of CEO. In addition, the directors decided to try to recruit Mr. Watsa, a prominent and respected outsider, at a time when the company was under fire for a co-CEO, co-chair governance structure that critics felt was contributing to RIM's growing problems.

Mr. Lazaridis and Mr. Watsa were introduced in 2009 by David Johnston, who is now Canada's Governor-General but at the time was the long-standing president of the University of Waterloo.

Mr. Johnston decided that he wanted to try to recruit Mr. Watsa as the school's next chancellor, and he sought the help of Mr. Lazaridis – who famously founded Research In Motion while he was a student at Waterloo – to make it happen. While Mr. Lazaridis and Mr. Watsa had not met before, Mr. Johnston asked Mr. Lazaridis to call Mr. Watsa and persuade him to take the job. Mr. Lazaridis did so, telling the Fairfax CEO that accepting the position would be the best thing he would ever do. Mr. Watsa agreed, and was later happy he made the move.

Three years later, the two were talking again – this time about the future of Mr. Lazaridis. Mr. Watsa's Fairfax had become RIM's fourth-largest shareholder, after PrimeCap Management, Mr. Lazaridis and Mr. Balsillie (who each owned roughly 5 per cent of the firm). Mr. Watsa, a value investor who tends to buy into companies that have fallen on hard times, was a fan of the company's products and accomplishments.

Again it was Mr. Lazaridis who reached out to Mr. Watsa, this time on the subject of joining the RIM board of directors. Mr. Watsa does not normally accept board nominations, citing the demands of Fairfax. But he agreed to meet with both Mr. Lazaridis and Mr. Balsillie to talk it over.

"Mike and Jim said, 'We've made this decision and we've taken it to the board,'" Mr. Watsa recalled. "I am a great fan of Mike and Jim," he said. "This is exactly the right decision for both of them."

Mr. Watsa likens the relationship between Mr. Heins and the two former co-CEOs to that between Tim Cook and Steve Jobs at Apple, where Mr. Jobs was the visionary and Mr. Cook was seen as bringing discipline to the firm.

"They needed a disciplined operator to take this forward," Mr. Watsa said.

Mr. Heins has long been considered a crucial link in RIM's executive chain, with broad responsibilities for the global expansion of the BlackBerry brand that has made it the smartphone of choice in many emerging economies. He was promoted in July, 2011, and became the overall authority for planning, products and sales.

In a recent interview, one former RIM executive described Mr. Heins as "hugely influential," adding that as the only one in RIM's senior management who could truly say no to the technologically knowledgeable founder Mr. Lazaridis and the forceful Mr. Balsillie on issues of significance, Mr. Heins increasingly found himself in a "gate-keeping" role at the company.

As Mr. Heins takes the reins, both Mr. Lazaridis and Mr. Balsillie will remain on RIM's board, and Mr. Lazaridis is taking on the new title of vice-chair of RIM's board and chair of the board's new innovation committee. The two men declined to say what they would do next, but it is clear they both could use a break.

"I think this has been the hardest working year of my life," Mr. Balsillie said, adding that he had 24/7 responsibility in multiple time zones, and has been working 80- to 90-hour weeks.

While there has been much talk of tension and disagreements between the two former co-CEOs, both men denied that, suggesting that the last year has been about hunkering down together.

Ms. Stymiest suggested that while she welcomed their decision, she is not worried about RIM's strategic direction.

"The board truly admires Mike and Jim for making what I think is a tough decision for founders to make, but one we are totally supportive of, and think is the right decision," she said. 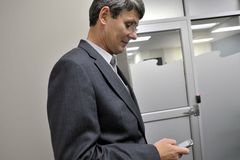 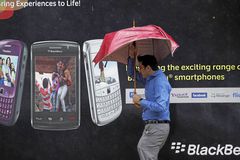 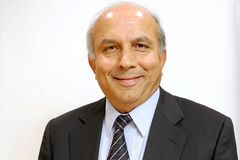 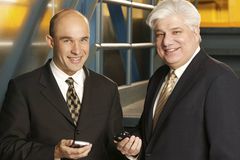 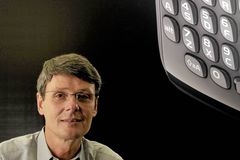