Jim Shaw is stepping down early from his post as chief executive officer of Shaw Communications handing the reins to his younger brother Brad two months before the previously announced date.

The changeover was meant to occur on Jan. 13, 2011, as the company prepares to integrate its newly-acquired TV channels, formerly owned by CanWest Global Communications Corp., in an industry that is seeing increasing convergence between broadcasters and the cable and telecom companies that distribute their signals.

But the abrupt change comes less than a week after Jim Shaw displayed unusual behaviour at lunch with investors that was put on by CIBC World Markets at Vancouver restaurant Il Giardino on Friday. Mr. Shaw appeared to be inebriated and responded to investors' questions with overly harsh criticism, said two people who were at the lunch.

Other scheduled investor meetings - hosted by Bank of Montreal in Montreal on Monday evening and Tuesday morning and Toronto-Dominion Bank in Toronto later on Tuesday - were cancelled by Shaw over the weekend.

The sudden departure brings to an end a colourful, and mostly successful, 12-year run as the head of Western Canada's largest cable company. But it also raises questions about whether the transition to new leadership should have occurred before now. The timing of succession has always been in the hands of the Shaw family, which controls the company through multiple-voting shares.

Neither Brad Shaw nor Jim Shaw returned calls for comment. An assistant for JR Shaw, the company's founder and executive chairman, said Mr. Shaw was unavailable.

Representatives from CIBC did not return calls or e-mails requesting comment. However, in an e-mail to institutional clients, one of the people who organized the lunch for the bank said: "We had Jim Shaw, Peter Bissonnette [Shaw's president]and [chief financial officer]Steve Wilson marketing on Friday and it is fair to say the transition from Jim Shaw to Brad Shaw is coming at the right time. Jim's behaviour was extremely unprofessional, and for those that witnessed it firsthand, I do apologize."

In a statement on Wednesday evening, Jim Shaw said: "We are well under way in the integration of the Shaw Media assets and it became clear to Brad and I that it would be best for Brad to assume the role of CEO immediately so that he can move forward with the necessary decisions."

Several prominent investment firms in Vancouver were represented at the lunch. Three people who attended the lunch at the posh Italian restaurant, where around 20 members of the city's investment community gathered around a long table in a private room, said it started as an awkward and embarrassing affair and got worse as it progressed.

Mr. Shaw has long been known for his brash and colourful remarks on analyst calls and in interviews, but his behaviour on Friday went well beyond his regular comportment, according to people familiar with Friday's events. These people commented that the tenor and severity of the insults this time around were shocking. None of Mr. Shaw's remarks was met with laughter, said people who were at the lunch. In particular, some attendees were shocked that Mr. Shaw rudely silenced Mr. Bissonnette and Mr. Wilson when the two executives tried to answer analysts' questions.

Mr. Shaw also asked inappropriate questions of portfolio managers, such as how much stock they owned and whether they held shares in Telus Corp., Shaw's Western Canadian rival. When one investor criticized Shaw's call centre service, Mr. Shaw threatened the questioner with "the back of his hand," said person who was there.

Mr. Shaw belittled investors who did not hold a large amount of the company stock, calling one person who oversaw a fund with 300,000 Shaw shares a "lightweight" and "pathetic," said the person.

"The whole thing seemed in jest, in poor taste absolutely, but certainly not malicious," said another portfolio manager who attended the lunch. "I would just call it unprofessional and unfortunate. Because I thought that Peter and Steve came across as quite engaging. Jim was just a bit of a distraction."

Less than a month ago, when Brad Shaw's promotion was announced, Jim Shaw denied that the changeover was related to his ability to continue steering the Calgary-based cable company. "I hear there's lots of rumours out there we're doing this because Jim is sick and that. We're not doing that," Jim Shaw told analysts on a conference call on Oct. 22.

"Jim Shaw is obviously a very passionate guy about his business and is very colourful in the way that he deals with questions and issues which certain shareholders have brought forward in the past," said Matthew Zabloski, a portfolio manager with Delbrook Capital Advisors, who was scheduled to be at the lunch but cancelled when it was delayed by 45 minutes. "He's a passionate guy. And to be totally honest, that's not always a bad thing."

Previously, Mr. Shaw has been extremely critical of industry analysts who asked tough questions about the company, and of competitors in the industry. Earlier this year, Mr. Shaw made a reference to a "camel" when discussing Egyptian-financed Wind Mobile on a conference call. Wind chairman Anthony Lacavera called his comment a "racial slur."

With a report from Boyd Erman 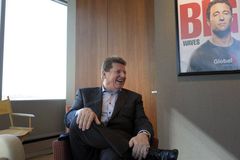