TransCanada Corp. is facing new risks in its bid for a quick approval of its long-stalled Keystone XL pipeline, including a potential delay to await completion of a government-ordered study into whether oil-sands bitumen is more dangerous to transport than conventional crude.

In the aftermath of the election and Hurricane Sandy's devastating impact on the East Coast, U.S. President Barack Obama has said he will take action in his second term to confront climate change, though he says his first priority is jobs.

Environmentalists are reviving their noisy 2011 anti-pipeline campaign, with a demonstration scheduled for Sunday outside the White House, and they have pointed to the decision on the Keystone pipeline as a key test of the President's resolve to battle climate change during his second term. Former U.S. vice-president Al Gore this week urged Mr. Obama to kill the Keystone XL project.

"Hurricane Sandy definitely served as a strong reminder that this administration has to look at climate as a top priority," said Danielle Droitsch, a lawyer with the Natural Resources Defense Council in Washington.

"And there is no doubt that there is a strong linkage between Keystone XL and increased production [in the oil sands] which also means increased climate emissions."

As the decision looms, the Canadian industry is being drawn into a massive public relations battle in which it will have to demonstrate that it is serious about reducing greenhouse gas emissions in the oil sands and can provide assurances that it maintains the highest standards of the pipeline safety.

At the request of the U.S. pipeline safety agency, the U.S. National Academy of Science is conducting a study on the safety of transporting oil-sands bitumen through pipelines and that work is not due to be completed until mid-2013. Should researchers find that the bitumen poses a greater hazard, they are then tasked with recommending ways to reduce the risk.

The administration may be reluctant to rule on the Keystone XL project while there is major study under way on the risks of transporting bitumen, said Daniel Weiss, senior fellow with the Center for American Progress, a left-leaning think-tank with close ties to the Democrats. A 2011 Alberta study concluded the diluted bitumen is no more corrosive than conventional oil.

On Thursday, TransCanada got a boost when the Building & Construction Trades and the American Petroleum Institute each called on Mr. Obama to move quickly to approve the controversial project, which will carry 1.1-million barrels per day of oil-sands bitumen from Alberta and lighter oil from North Dakota's Bakken fields to the U.S. Gulf Coast.

"As the President looks for opportunities to provide a quick boost to the economy and strengthen our energy security, we urged him to approve the full Keystone pipelines as soon as possible," API executive vice-president Marty Durbin said in a conference call from Washington.

While the petroleum lobby group carries little weight with the Democratic administration, its message was echoed by the representative of construction unions who are eager for the jobs that the $7-billion project will create. In a statement issued Thursday, Sean McGarvey, president of the union group, said his members worked hard to re-elect the president, and now want him to make good on his promised to focus on job creation by approving the pipeline.

Mr. Obama rejected TransCanada's application last January after being forced into a untimely decision by Republicans in Congress, but invited the company to re-apply. Facing objections in Nebraska, the company was forced to re-route the pipeline around the environmentally-sensitive Ogallala aquifer. The state's Department of Environmental Quality has completed its initial review and will hold a public hearing in two weeks where opponents promise to mount stiff opposition.

Nebraska Governor Dave Heineman is expected to advise the U.S. State Department by the end of the year that his government supports the new route.

TransCanada spokesman Shawn Howard said the company is confident it will gain approval for the cross-border pipeline permit from the State Department by the end of March, and construction will begin immediately. 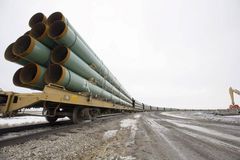 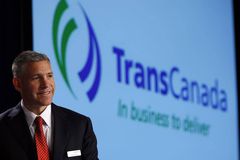 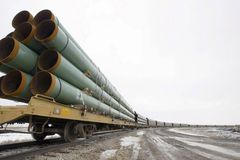