Kinder Morgan Canada is accelerating plans to boost deliveries of Alberta crude to the West Coast, pressing ahead with new pipeline capacity that raises the stakes in a high-profile race to export Canadian energy to Asia.

The company is preparing to accept bids for a substantial expansion of its 1,150-kilometre Trans Mountain pipe, which connects Edmonton with British Columbia's Lower Mainland. There, oil can be loaded on ships and sent to destinations in China, South Korea and California.

If built, that new capacity will provide an important new outlet for Canadian energy companies. The industry has increasingly called for an alternative to its dependence on central U.S. markets, and filled growing numbers of tankers bound for Asian markets in recent years. With North American demand stagnating, Canada's oil patch has directed greater attention toward Asia's rising energy thirst, amid hopes that greater access to a vibrant new market will spur more attractive crude prices.

For Kinder Morgan, a system expansion would kick-start an effort to beat out growing competition for an Asian connection. Both of Canada's railway companies have proposed "pipelines on rail" to take oil to the West Coast, and Enbridge Inc. is seeking approval for its $5.5-billion plan to build a new pipeline called Northern Gateway across northern B.C.

But expansion plans will expose Kinder Morgan to the fierce opposition that has greeted Northern Gateway - especially since Trans Mountain feeds tankers that sail past Vancouver, the birthplace of Canada's environmental movement. Kinder Morgan has yet to seek regulatory blessing for its expansion.

The company has been spurred to action, however, by mounting demand for a system that forms the only existing connection between Canadian crude and offshore markets. It plans to hold an "open season" later this year that will allow it to solicit oil companies for commitments to ship on new capacity it hopes to add by 2014 or 2015.

"What we've got to assess with the market is how big is that expansion," Kinder Morgan Canada president Ian Anderson said in an interview.

Kinder Morgan has long discussed plans to expand the Trans Mountain system. In 2008, it completed a $750-million project that added 40,000 barrels of pipe capacity by twinning the system through Jasper National Park.

That hasn't been enough. In February, companies asked to ship 33 per cent more crude through Trans Mountain than the system could accept. In part, that's because problems on other pipelines into the U.S. Midwest have forced a search for alternatives. But interest is also growing in ocean exports.

Last year, Kinder Morgan offered oil producers 50,000 barrels a day of guaranteed throughput to its dock, where tankers are loaded. It received bids for 95,000, and ended up signing contracts for 54,000. Over the next decade, the premium it receives for those contracts will total $286-million.

"The funds that we are collecting for that will be used in part to fund our next phases of expansion planning," Mr. Anderson said.

Despite the limited amount of free pipeline space, Canada's crude shipments to Asia have been rising. The total volumes remain low - in 2010, Asian customers received 14,758 barrels a day of Canadian crude, or about 1 per cent of total Canadian exports.

But according to numbers compiled by the National Energy Board, shipments to destinations like China, Japan, South Korea and Singapore have grown 17 per cent since 2007; they climbed 6.5 per cent last year alone.

Asian exports have already stoked worries about political ramifications in the U.S., where a recent analysis for the Department of Energy concluded that "if more oil is shipped to Asia instead of the U.S., this would lead to higher U.S. imports of crude oil from non-Canadian sources, notably the Middle East."

Crude flows through Trans Mountain could, however, benefit both Canada and the U.S., since some are likely to end up in California.

"I think this would replace a lot of the declining volumes from Alaska," said Chad Friess, an analyst with UBS Securities. "Alaskan crude is becoming increasingly scarce and those refineries are well-prepared to handle heavier [Canadian]crudes. So it's a good match."

That could expose a set of messy cross-border issues, since California has imposed a low-carbon fuel standard that is "discriminatory" against oil sands crude, according to Brenda Swick, a McCarthy Tétrault lawyer. She has warned that those rules, which would come under the spotlight with greater exports to California, could spur a NAFTA fight.

Trans Mountain expansion would also fuel opposition to crude pipelines in B.C. Though Mr. Friess believes 80,000 barrels of new pipe could delay Enbridge's Northern Gateway by a year, it would introduce another project for critics to target. Kinder Morgan, however, is hoping to fend off opponents early, and has created a $3-million legacy fund to fund environmental initiatives, tied to its successful completion of the new pipe in Jasper.

"It is strategic, obviously, in that we're saying environmental concerns raised by pipeline construction in the most difficult and pristine place in the world can be overcome," Mr. Anderson said. 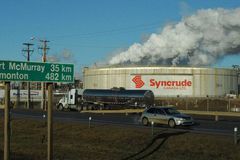