Retailer Leon's Furniture Ltd. is acquiring archrival the Brick Ltd. for about $700-million in a friendly deal that is aimed at strengthening the merchants as they prepare for the next foreign retail invasion.

The agreement, which was announced Sunday evening, will see the country's two largest specialty furniture retailers team up amid a sluggish economy and weakening housing market, which has put strains on sales growth and forced the two big players to look for new ways to gain an edge.

The planned takeover comes after Edmonton-based The Brick spent the past few years digging out of a troubled financial situation, having now repaid bondholders most of the $110-million it owed them. Toronto-based Leon's has been losing ground amid soft consumer confidence for its discretionary purchases and rising household debt.

Now the two rivals are looking to pick up momentum by combining forces to help fight off expanding foreign players, including U.S. discounter Target Corp.

Target will start opening stores here in March with its style-conscious home furnishings.

"During these economic times where we have seen multiple American corporations make inroads in our country through acquisitions, it is a pleasure to see two successful Canadian retailers reach such an agreement that will better serve Canadian consumers," said Terrence Leon, chief executive officer of Leon's who will become CEO of the combined new company.

The Leon's and Brick marriage is the latest move among retailers that will help reshape the merchandising landscape and put further pressure on weaker players.

"It's a Darwinian struggle in this category," said Michael Kehoe, broker at retail adviser Fairfield Commercial Real Estate Inc. in Calgary. "It's a brutally competitive landscape and more competition is arriving. I just see this as a natural progression."

Under the deal, which is expected to close early next year, Leon's will acquire the Brick for $5.40 a share, as well as its outstanding share purchase warrants for $4.40 a warrant. It represents a premium of about 62 per cent to the 20-day volume weighted average price of the Brick's shares on the Toronto Stock Exchange as of Friday, the companies said.

The two chains will keep their banner names. Vi Konkle, a former Wal-Mart Canada Corp. executive, will continue to head the Brick from its Edmonton offices.

Stephen MacLeod, an analyst at BMO Nesbitt Burns, said he expects the new company will close few if any stores. The model of keeping multiple banners has worked for U.S.-based Best Buy Co. Inc., which bought Canadian rival Future Shop Ltd. about a decade ago but held on to both names.

"For Leon's, it would give them more exposure to Western Canada, particularly British Columbia," he said. "The business models are slightly different. Leon's tends to own most of their real estate, whereas the Brick doesn't own real estate. Leon's stores tend to be bigger."

The Brick runs centralized distribution centres, while Leon's runs warehouses from its individual stores, he said.

They're both known for television commercials that invade people's homes with relentless "Don't pay a cent event" and "Ho ho hold the payment" slogans from Leon's and "Nobody beats the Brick." They specialize in furniture but also carry low-margin electronics and appliances.

Electronics sales have been hurt by deflation and the "showrooming" effect of consumers using bricks-and-mortar stores to check out the products, but then heading to an e-commerce site such as Amazon.com to purchase the item at a lower price. The appliance market also has become more crowded with home-improvement players such as Home Depot Inc. and Lowe's Cos. Inc. Even Canadian Tire is now stocking stoves and refrigerators.

But the Brick enjoyed a rebound since early 2009 when its stock sunk to $1 from more than $9 in 2008, having been hit by the recession and a liquidity squeeze. It brought in Bill Gregson as CEO – today he is executive chairman – to turn it around with better product-demand forecasting, inventory stocking and staffing levels in stores. The retailer shifted more to mattresses and furniture to benefit from their higher profit margins.

The biggest bondholders were Fairfax Financial Holdings Ltd. and William Comrie, the Brick's founder. They along with Mr. Gregson and an RRSP fund together hold 66.6 per cent of the Brick's shares and warrants, making the deal getting the nod virtually inevitable.

Leon's intends to finance the cash portion of the consideration from existing cash resources and $500-million in committed bank facilities fully-underwritten by CIBC and Desjardins Capital Markets. These committed bank facilities are comprised of a $400-million four-year term credit facility, and a new $100-million revolving credit facility which, if required, will be used to finance the transaction and otherwise will be available for general corporate purposes. 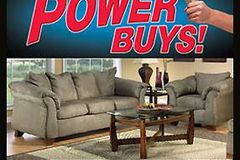 Behind Leon's silly ads is a serious dividend stock
November 22, 2011