Loblaw Cos. Ltd. is buying Canada's biggest Asian food retailer for $225-million, allowing the grocer to extend its offerings to what it says is the country's largest growing customer segment.

"Some of our customers have a nickname for us - The Asian Loblaw," Cindy Lee, chief executive officer of T&T , said in a statement.

Added Allan Leighton, president of Loblaw, during an analysts' conference call: "The ethnic market opportunity in Canada is vast. Today we have a relatively small share. Our objective is to be the No. 1 player. T&T gives us the platform to build to this objective."

But Loblaw executive chairman Galen G. Weston also warned that the second half of the year will be tougher for the company - and profit and sales will probably be "significantly challenged."

"This quarter's improvement in earnings was largely cost and gross margin driven," Mr. Weston said. "This is a trend that we do not expect to continue. We have consistently said that the second half of this year would be by far the toughest, and with market volumes in decline, inflation dropping off, intensified competitive activity and a substantial ramp-up in our infrastructure and renovation programs, we expect sales and margins to be significantly challenged."

The company's latest results were helped by increased food prices, although the chain's internal food inflation rate dropped from the first quarter. And while the retailer's food and drug-store sales were strong, its private-label Joe Fresh Style apparel business saw just "modest growth" and other non-food merchandise sales continued to drop.

Mr. Leighton told analysts that sales volumes have actually dropped in the past number of weeks, and the company thinks this trend will continue.

Sales declines, coupled with an expected lower food inflation rate for the rest of the year, will force Loblaw to run more promotions, which is expected to pinch profit margins, he said.

The retailer also plans to increase its capital spending this year to $1-billion as it ramps up its store renovation and supply chain improvements.

In the second quarter, Loblaw beat analysts' forecast of a profit of 56 cents a share, helped by strong gross profit margins and a low tax rate. However, sales didn't meet analysts' target of $7.32-billion, according to a ThomsonOne Analytics survey.

"All in all it's a good quarter," said David Hartley, managing director of equity research at BMO Nesbitt Burns.

The T&T acquisition is expected to boost Loblaw's bid to expand into the burgeoning ethnic food market, Mr. Hartley added. "To be there is very important and it's getting bigger every day."

Loblaw has been bolstering its ethnic food offerings at its discount No Frills supermarkets over the past several years, and is now adding No Frills stores in Western Canada. The stores cater to ethnic consumers with an emphasis on fresh produce such as karela and okra.

Loblaw is targeting a market whose households spend up to 23 per cent more on groceries than others in Canada, according to data last year.

They are members of the fast-growing South Asian and Chinese Canadian communities, and they account for about one-third - or $5.7-billion - of grocery spending in Toronto and Vancouver, a study last year by market researcher Solutions Research Group found.

It found that South Asian Canadians spend $154 a week on their groceries, or 23 per cent more than an average household in Toronto and Vancouver.

Loblaw's No Frills has copied elements of T&T of Richmond, B.C., which is considered a westernized version of Chinatown shops carrying live crabs and barbecued duck in bright, wide-aisled stores.

More recently, T&T started to branch out to South Asian goods, such as coconut milk and instant fried noodles with chili.

Loblaw said that it expects the T&T deal to close before the end of its fiscal year, and that it will add to its bottom line in the first year after the closing.

It said $191-million of the $225-million purchase price will be paid in cash and the rest through preferred shares issued by T&T, the value of which will be tied to the latter's future performance.

Loblaw also said it is making progress in its turnaround efforts after faltering a few years ago in a botched restructuring. Mr. Weston took the helm then, aided by Mr. Leighton, a British businessman and long-time adviser to the Weston family, which controls the grocer. 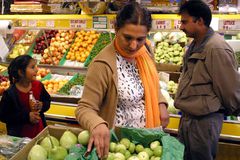