Grocer Loblaw Cos. Ltd. is making a big retail bet in the United States with its Joe Fresh fashion line, amid slowing spring sales of its cheap-chic offerings in a sluggish Canadian apparel market.

On Wednesday, Loblaw said it will roll out almost 700 Joe Fresh shops next spring within troubled U.S. department-store retailer J.C. Penney, getting close to achieving its goal of running as many as 800 Joe Fresh stores across the United States.

Loblaw's four-year deal with J.C. Penney emerged as the country's largest grocer reported that its second-quarter Joe Fresh sales failed to get a lift from a year earlier. What's more, teaming up with J.C. Penney is a risky step. The U.S. company is struggling through a massive makeover under Ron Johnson, a retail star who took the top job late last year after launching tech giant Apple's iconic stores. The latest deal raises the stakes for Loblaw and Joe Mimran, creative director for Joe Fresh.

"It's a gamble – of course it's a gamble," said Walter Loeb, president of retail consultancy Loeb Associates in New York and a former director of Hudson's Bay Co., noting that Mr. Mimran has taken chances before. "I think this is going to be a winner."

Joe Fresh has been one of the few engines of growth for Loblaw, which has been scrambling over the past six years to return to its glory days. Now the grocery titan is racing to find more ways to pump up its Joe Fresh business and feeling the heat to make its J.C. Penney partnership work.

Loblaw is counting on J.C. Penney's Mr. Johnson and his vision to reinvent the department store with specialty shops such as Joe Fresh and a new pricing strategy, emulating his success in re-imagining electronics retailing for Apple.

"Ron is looking for brands – he's looking to really differentiate himself in the United States," Mr. Mimran said in an interview. "He's looking to transform the business and he wants to do it with innovation. I think our brand offers that."

Vicente Trius, president of Loblaw, said the deal with J.C. Penney carries limited financial risk, requiring no capital expenditure on the grocer's part and probably just a few people to manage the business.

It will boost Loblaw's bottom line from the get-go, he said. "We see it as promising."

Mr. Trius acknowledged that Joe Fresh grappled with flat second-quarter sales. But he noted that the overall apparel industry's sales were in decline. Meanwhile, the six Joe Fresh U.S. stores are meeting expectations. In May, Joe Fresh ranked as the top clothing brand in Canada, according to market researcher NPD. Analysts say the brand is close to generating $1-billion of sales a year, although Loblaw does not break out the figures.

Joe Fresh operates in about 300 stores in Canada, mostly Loblaw superstores, but also in 12 standalone stores, as well as six stores in the New York City area.

He said on Wednesday that the J.C. Penney deal means that Joe Fresh will open many fewer standalone stores in the U.S. than originally contemplated – perhaps just 30 to 50 as flagships in urban centres.

He said Mr. Johnson got in touch with him about four months ago because he was impressed with the Joe Fresh offering. "They started referring to our line … as an inspiration for their own J.C. Penney line."

Now with the J.C. Penney deal, the scale of the Joe Fresh expansion will be unprecedented for a Canadian brand, he said. "It will give us national exposure. It's akin to a roll-out but done very quickly."

At J.C. Penney, Mr. Johnson is trying to create specialty shops, including Joe Fresh, within the department store with cafés and juice bars along a wide aisle – called the Street – connecting the shops, according to a report this week by industry publication Women's Wear Daily. Staff will be equipped with hand-held devices to speed checkouts and research products.

Still, results so far have been disappointing, raising concerns about Mr. Johnson's new strategy, particularly his move to drop coupons and sales in favour of low everyday pricing and monthly value deals.

J.C. Penney "has its work cut out for it," said Peter Sklar, retail analyst at BMO Capital Markets. But for Loblaw, "I don't see how it's going to be negative."

new
Loblaw profit falls as grocer races to revamp
May 9, 2018 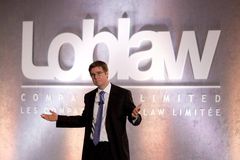 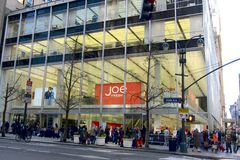 Loblaw locked in labour dispute at Asian supermarket chain
June 19, 2017
The rise and fall of the ethnic mall
April 30, 2018 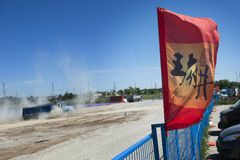 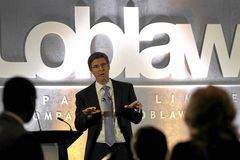 Loblaws to remove artificial colours and flavours
May 1, 2018 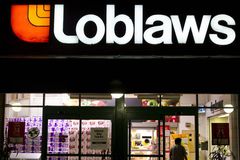