The new chief executive officer, just three months into the job, signalled Thursday that he's willing to anger investors to rebuild the insurer's balance sheet. Manulife slashed its dividend in half - the only major Canadian financial institution to cut its payout since the crisis began - in a move that will save about $800-million a year but will also be unpopular with many shareholders.

Mr. Guloien suggested he is pushing the firm's capital levels high enough that Manulife could withstand any negative scenario in the economy or financial markets that he can realistically foresee. But investors reacted Thursday by sending Manulife's stock tumbling nearly 15 per cent.

"I'm not happy about it, because I had the impression that they were going to pay this dividend, but since they didn't I have to choke back my anger," said Stephen Jarislowsky of Jarislowsky Fraser Ltd., a major Manulife shareholder. Still, he said he's more likely to buy more shares while the price is depressed.

While many U.S. and European insurance companies have reduced dividends amid massive losses in their investment portfolios, Manulife becomes the first large Canadian financial company to do so since National Bank of Canada cuts its dividend in the early 1992.

Manulife's rationale was that, in light of the turmoil of the past year, it is better to be safe than sorry. But the move wasn't made lightly, Mr. Guloien said.

"Manulife's balance sheet and capital position are in great shape," Mr. Guloien said in an interview. "But when we do our capital planning, we have to look at far more negative scenarios than what's currently happening."

The company also has to consider what it's been through.

When the demise of Lehman Brothers and last-minute rescue of American International Group Inc. sent stock markets tumbling in September, the value of Manulife's massive equity portfolio dropped, forcing the company to raise billions of dollars of capital on the fly.

Much of the money is invested in stocks and a little more than five years ago, former chief executive officer Dominic D'Alessandro decided to leave that stock portfolio unhedged.

The market plunge created a large gap between the amount that Manulife has promised to pay its variable-annuity customers in the future, and the amount set aside to meet those guarantees.

The gap stood at $21.42-billion at the end of June, down from about $30-billion three months earlier, as markets rebounded sharply during the quarter.

The period last fall when the gap was widening is not something that Mr. Guloien ever wants to experience again. "Those were very uncomfortable times, and we want to put as much distance between us and that possibility as we possibly can," he told analysts on a conference call.

Manulife went to the market in December and sold more than $2-billion in common shares, something Mr. Guloien said he found "very humbling" and does not want to repeat.

His decision to voluntarily boost Manulife's capital levels miles above the minimum levels required by regulators marks a dramatic change in strategy from Mr. D'Alessandro's reign.

Mr. D'Alessandro, the fiery leader who had built Manulife into a global titan, embarked on a campaign last fall to reduce its capital requirements. He believed that regulators were requiring Manulife to put aside too much, potentially damaging it in the short term, for payments that wouldn't fall due for decades.

Access to Information documents obtained by The Globe and Mail illustrate some of what Mr. D'Alessandro went through.

On Sept. 30, the head of Canada's regulator, the Office of the Superintendent of Financial Institutions, wrote an e-mail to various OSFI officials. "D'Alessandro just called and asked that we try to meet next week with the company to discuss capital," Julie Dickson wrote, noting that the meeting would replace one that had been arranged for November. Mr. D'Alessandro wanted to discuss the capital requirements for the variable-annuity, or segregated funds, business, other e-mails show.

Discussions took place in October in which he laid out why he felt the rules were too onerous, and OSFI officials had a flurry of internal discussions. On Oct. 28, the rules were changed.

OSFI consulted with more than one insurer that month, but the changes were most important to Manulife.

Federal lobbyist records show that Mr. D'Alessandro also met with Prime Minister Stephen Harper on Nov. 6 to discuss "financial institutions." It is not known what was discussed at the meeting with Mr. D'Alessandro.

On Nov. 18, Finance Minister Jim Flaherty received a memorandum from OSFI updating him on Manulife.

"In short, while Manulife's results have been very good historically, the recent downturn in equity markets has had a significant impact on its capital levels," the memorandum stated.

The remainder of that sentence, and much of the memorandum, has been blacked out in the copy obtained by The Globe.

The memorandum said that loans Manulife obtained from banks last year were "a positive development," and listed "Support provided by OSFI to Manulife to date," which included the revision to the capital rules.

Yesterday, Mr. Guloien emphasized that, while the autumn was a difficult period for the company's executives, Manulife was never in a precarious position.

"We were a triple-A-rated company until very recently, and now we're double-A plus," he said.

"Manulife has always been a very strong company. It's clear that various times, especially last fall, we were under more stress than we are today."

John Kinsey, a portfolio manager at Caldwell Securities, said his firm will review its Manulife share holdings on an account-by-account basis for its customers.

"We have clients that are affected by this because they have to get their monthly dividends, this is what they live on."

Put away the torches, Guloien did the right thing
August 6, 2009 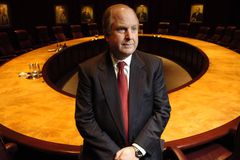