Departing Potash Corp. of Saskatchewan Inc. CEO Bill Doyle presided over a remarkable enrichment of the company's shareholders in his 15-year tenure. At the top of that list is Mr. Doyle himself.

When Mr. Doyle moves into an advisor's role this summer, he will have accumulated roughly $400-million (U.S.) in compensation since he became CEO in July, 1999, we calculate. That includes more than $300-million in profits from stock options, both realized and yet to be used.

Many Potash Corp. investors who bought stock in the first decade of his tenure might have no quibble with those figures, as large as they may be. The stock is up roughly 1,200 per cent since Mr. Doyle assumed the CEO role, and at their 2011 high, the return topped a breathtaking 2,500 per cent.

"The majority of Bill Doyle's compensation is aligned with the long-term interest of shareholders," says company spokesman Bill Johnson. "When you link compensation to performance and executives deliver long-term outstanding results, the compensation follows."

Much of that return, though, has been due to the long-term growth in the use, and price, of potash, the company's key product. Mr. Doyle's option riches raise the question of just how much executives in the resource industry should benefit when the price of their commodity product, over which they have no control, rises.

And the recent woes of Potash Corp. stock – it has underperformed its agricultural peers, as well as the broader markets over the last five years – also illustrate a longstanding problem with aligning option-based compensation with stock performance.

To arrive at the figures, we examined nearly two decades' worth of the company's proxy circulars, as well as stock-sale records filed with securities regulators.

From 2000, Mr. Doyle's first full year as CEO, to 2013, he collected just under $14-million in salary and nearly $15-million in bonuses and other annual incentive payments. Stock awards and other long-term incentive plans yielded another $20-million in compensation over the period.

It is the company's use of stock options, coupled with an escalating share price, that have been the key driver of his wealth: Mr. Doyle has made $234-million in profits on his options so far. (Some of Mr. Doyle's option profits came from awards given before he became CEO, in the first half of his 27-year tenure with the company, Mr. Johnson notes.) Mr. Doyle's current option holdings would yield another $92-million in profit, were they all exercisable at today's prices.

Stock options allow the holder to purchase a share of stock at a set amount, below the current market price. The larger the spread between this "exercise price" and the market price, the more valuable the option is.

Potash Corp. gave its executives annual option grants numbering in the tens of thousands. Through a series of splits, however, a share held a decade ago has now become 18 shares. Options held by executives multiplied similarly, until they numbered in the millions.

The company's stock split as its price and potash prices rose. U.S. government data suggested the typical price of a tonne of potash at the time of Mr. Doyle's ascension was about $150; at its 2008 peak, some trades touched $700. (It is roughly $300 today.)

In an analysis in October, 2010, we found that top executives and board members stood to make more than $700-million, largely from options, from the potential sale of the company to BHP Billiton PLC at a (split-adjusted) price of $43.33 per share.

Stephen Jarislowsky, whose money management firm, Jarislowsky Fraser Ltd., owned Potash Corp. shares for its clients, told the Globe at the time the figure was "absolutely obscene," since Potash Corp. executives "are not responsible for the worldwide demand for potash and the lack of supply, other than what they put out of their own mine."

The passing of the BHP offer – Mr. Doyle argued it undervalued Potash Corp., and the federal government ultimately blocked the bid – in 2010 has been seen as a missed opportunity. The stock has traded at prices nearly one-third below the offer level, and the collapse of the global pricing duopoly has darkened the near-term outlook for Potash Corp. and the industry as a whole.

Investors who bought Potash shares in the heady months after the BHP bid was turned away have seen their investment cut nearly in half, but during that time, Mr. Doyle made well over $100-million in profits from options issued to him nearly a decade before.

"While the optics of a 10-year program paying out right after the stock has gone down for a year or two aren't great, it is simply a misalignment: You're looking at 10-year outcome and comparing it with two years of performance," says compensation consultant Ken Hugessen.

The figure of $92-million in potential profits from options Mr. Doyle holds now fails to include more than one million options with exercise prices above Friday's close of $33.33. Mr. Doyle will not retire until 2015, and he has three more years after that to exercise his options. Were Potash Corp. stock to hit $50 in the next four years, a number still below its 2011 highs, Mr. Doyle's future option profits would be $177-million – and his total earnings would approach the half-billion-dollar mark.

Potash Corp. has not been blind to the issues with options. Starting in 2005, it has used a "Performance Option Plan" that requires the company hit certain targets in order for options to become usable. (So far, Potash Corp. has met its goals.)

In recent years in Canada, and particularly in the United States, companies have shifted away from traditional stock options and towards plans that measure whether a company has performed versus its peers, Mr. Hugessen says. "There's a belief, and it seems sensible, that that might be more closely aligned with whatever difference management is making in how they manage the company." 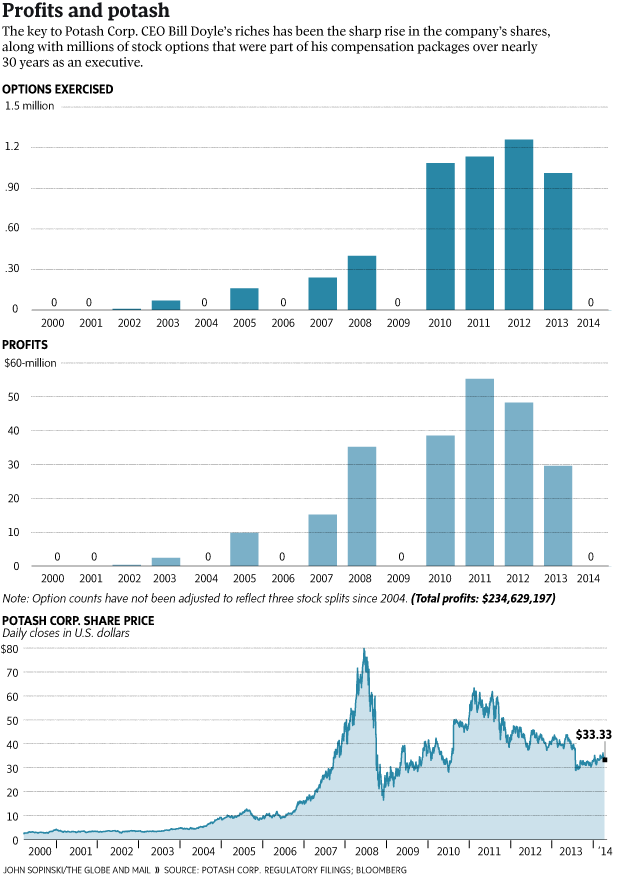 Doyle’s exit from Potash well-timed – for him
Subscriber content
April 8, 2014 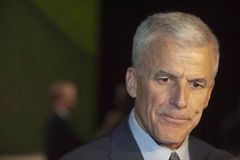 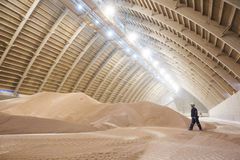