Ottawa's decision to spike the $6-billion takeover of Progress Energy Resources Corp. promises to ripple through stock markets Monday, hitting not only the natural gas company in question, but possibly others that investors believed could at some point yield fat takeover premiums.

The federal government said Friday that Petronas, a state-owned Malaysian concern, did not clear the "net benefit" test for its proposed takeover of Progress. Petronas offered a 90-per-cent premium to the Progress stock price prior to its original bid, but the deal needed the blessing from the Conservative government.

Petronas now has a month to change the government's mind, but market players are already spooked and looking well beyond Progress. China's CNOOC Ltd., for example, is under scrutiny in its bid for Nexen Inc.

But trading Monday will be about more than what will happen to Progress and Nexen. Investors are now weighing whether other companies they once saw as easy targets for foreign investors with deep pockets will face similar, although undisclosed, roadblocks.

Alan Jochelson, a partner and mergers and acquisitions specialist at Gowling Lafleur Henderson LLP in Calgary, said the government considered more than the hefty premium Petronas offered Progress shareholders when weighing whether the deal would benefit Canada.

While the premium is astonishing, some believe it pales when stacked up against the value of Progress's actual assets. Natural gas companies are being hammered because of languishing gas prices, rather than investors calculating what their reserves are really worth.

"If you understand that the stock price is trading at a deep, deep discount to value, then paying a 60-per-cent premium to current [stock] value, is still a screaming deal," Mr. Jochelson said. "We're sort of stuck. We're in this tension space between wanting to ensure our resources do get developed and jobs do get created in Canada, and giving away the farm."

"I think the message is you can't waltz in our country and buy our assets at such a deep discount," Mr. Jochelson said.

Sources say the federal government wanted more time to review the deal, but Petronas would not agree to an extension. The appeal phase is standard. Only two other deals have ever been rejected under the Investment Canada Act and neither involved the oil patch.

Eric Nuttall, portfolio manager for the Sprott Energy Fund, believes Progress will drop by 30 per cent now. He predicted "carnage," calculating that companies can expect to see a $10-billion plunge in market value.

Others think cooler heads will prevail.

"I don't think it's going to be as bad as people fear," said David Simon, managing director at Twin Capital Management LLC in New York. "I'm glad we had a whole weekend for people to take it in and digest it."

He expects shares in Progress and Nexen to drop by as much as 10 per cent to 15 per cent Monday morning, but bounce back if it becomes clear the government is keen to get both transactions approved.

"I think Petronas tried to play hard ball with the Harper government and the Harper government showed people that you don't screw around with us," he said. He said it appears Ottawa was not ready to issue a ruling on the deal, and when Petronas would not agree to another extension, had no choice but to reject it.

Mr. Simon – whose companies hold shares in Nexen but not Progress –believes there is a 70-per-cent chance both deals will be approved.

Exxon Mobil Corp., which was rumoured to make a competing bid for Progress, last week offered $2.6-billion for Celtic Exploration Ltd. While Exxon is already a major player in Canada, traders expect Celtic to take a hit as well. Companies like Encana Corp. and Talisman Energy Inc., both with major natural gas holdings, could also suffer. Smaller companies traders hoped would be taken out will also take a bruising, traders predict.

With files from Nathan VanderKlippe in Calgary 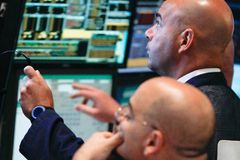