The revelation by CME Group Inc., MF Global's immediate regulator, suggests the broker violated a central tenet of futures brokerages. It could put client money at risk and erode confidence in a market that for decades has enjoyed a sterling reputation for safety.

The fall of the brokerage led by ex-Goldman Sachs boss and former New Jersey governor Jon Corzine sent shock waves through commodity markets on Tuesday as futures traders feared the damage could spread or that similar problems could hit other brokers.

The New York Times, meanwhile, reported that federal regulators discovered that hundreds of millions of dollars in customer money – supposed to be segregated, and protected from the rest of the business – had gone missing.

"Reports of shortfalls of client money ... if true, would be a disaster for all the smaller brokers and banks as nobody will trust them anymore," one London trader said.

MF Global had $7.3-billion (U.S.) in customer assets on Aug. 31, according to the latest data from the Commodity Futures Trading Commission.

MF Global filed for Chapter 11 bankruptcy on Monday after failing to find a buyer. Bets Mr. Corzine made on euro zone sovereign debt led a plunge in the company's stock last week, and caused agencies to cut its ratings to junk.

MF Global is the eighth-largest U.S. futures broker, and is a big player in commodity markets globally. Its collapse over less than a week was smaller, though reminiscent of that of investment bank Lehman Brothers in 2008.

Asked whether CME's clearinghouse would be on the hook for any losses, Mr. Donohue said that it would not be. The same may not go for customers. "There's always the risk as well that customer funds are not properly protected," he said.

CME is MF Global's main exchange regulator and is responsible for ensuring that its clearing members stay in compliance with rules on customer funds.

"When you have a dent in one of the foremost protections, it's going to cast a pall over the market as a whole," said Michael Greenberger, a former director of the U.S. Commodity Futures Trading Commission's trading and markets division.

"I'm sure that customers of MF Global are not feeling very good right now, and [are]madly investigating their rights and the facts of this case," said Mr. Greenberger, a University of Maryland law professor.

KPMG, appointed as administrators to MF Global's British arm, said it had been busy closing out positions all day under a new U.K. regime set up to prevent a repeat of the slow and painful work-out of the Lehman collapse.

"It's still a large number. It's still billions," said Richard Fleming, KPMG's head of restructuring. "We'll know a lot more at the end of the day."

Mr. Fleming said he was confident clients would see their money again. "Our strategy this morning has been ... where we have clients whose position is reconciled, and are due funds, then that money will flow."

Lehman's bankruptcy is still being disputed, with clients often unable to get access to frozen assets for several years.

The bankruptcy filing put a sudden end to Mr. Corzine's drive to transform the more than 200-year-old MF Global into a mini-Goldman, and made it the most prominent U.S. victim of the euro zone debt crisis.

In Australia, trading in grain futures and options was suspended by bourse operator ASX Ltd., prompting concerns about the integrity of the country's agricultural futures market.

"We're sitting out here with risk that we can't cover," said Jonathan Barratt, head of Sydney-based Commodity Broking Services. MF Global was one of the largest participants in the country's agricultural futures market.

Fears the collapse might hurt other market players spread on what was already a dark day for stock markets in Europe, after Greece said it would subject its bail-out to a referendum, deepening the sense of crisis in Europe.

European stocks suffered their biggest one-day selloff in a month after the news out of Greece. U.S. stocks also tumbled. 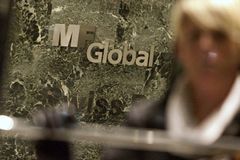