In-store mood music may get no respect, but it does help retailers get customers.

The company that paid $305-million for iconic elevator-music Muzak Holdings LLC on Thursday acknowledged the name carries an unenviable association with boredom.

"The Muzak brand is really a classic brand. Is it occasionally used as an epithet for elevator music? Absolutely. But it has a very interesting and storied past," he said. "Music is still soothing, and data shows that the appropriate music in stores can increase sales by 18 per cent."

Mood Media will more than double in size and dramatically expand its geographic footprint with the takeover. Together, the companies will have a music library with more than 1.7 million tracks, and music playing at 470,000 locations in 39 countries.

Muzak was founded in the 1930s to distribute music to retailers and theatres, and became known for its bland sound that calmed people riding in elevators, which at that time was a nerve-wracking experience. It survived for decades and expanded through digital distribution, but ran into trouble with debt during the recession. The company, based in South Carolina, emerged from Chapter 11 early in 2010 after a year in bankruptcy protection and a debt reorganization.

Muzak is still the leading commercial sound company in North America, while Mood Media operates a similar business, mostly in Europe and Asia. The two companies have very little overlap, so "we can add our full service digital offering to Muzak's huge footprint," Mr. Abony said.

At some Timberland retail outlets, for example, it provides an evergreen forest scent to enhance the image of a store that sells hiking boots and outdoor clothing. "Retailers believe that even if their store looks good and sounds good, but doesn't smell good, it's still not an attractive experience [for customers]" Mr. Abony said.

The industry is at an "inflection point" because it is shifting away from just selling audio products to a whole range of in-store media, he said. Already, 20 per cent of Mood Media's business involves video.

Mood Media, which trades on the Toronto Stock Exchange, was formed from the merger of several music distribution businesses. It changed its name from Fluid Music Canada last year.

Mr. Abony said that despite the jokes about elevator music, the business is very stable and has the potential for long-term growth. "Seventy-five per cent of our revenue is contracted and recurring every year," he said. "It's a very predictable, very visible, very cash-generative business, and the average tenure of our customer is 17 years."

Analyst Edward Williams of BMO Nesbitt Burns Inc. in New York said the acquisition is a "transformational event for Mood Media [which will]dramatically increase the size of the company, and build out their geographic diversity and add a significant presence in the U.S. market." There is a lot of potential for in-store marketing - particularly with video - that goes beyond piped-in music, he said.

To pay for the Muzak acquisition Mood Media will borrow $480-million from Credit Suisse, some of which will be used to refinance its existing debt.

Mood Music's stock price jumped almost 7 per cent Thursday after the Muzak deal was announced. Its shares have seen a sharp runup in recent days, climbing almost 80 per cent in the past month. 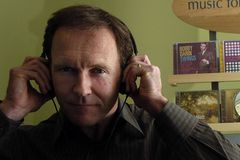