A report commissioned by one of the most vocal opponents of the proposed Northern Gateway oil pipeline questions the economic case behind the project, which would connect oil sands crude to Asia via Canada's West Coast.

There's ample pipeline capacity to handle oil sands production growth of 50 to 100 per cent over 2010 levels by 2025, said the report, which ForestEthics plans to submit to the regulatory panel weighing the $5.5-billion proposal.

It said Northern Gateway's backer, Enbridge Inc. , is basing its assumptions on an "unreasonable" oil sands production growth rate — a more than tripling in output by 2035 over 2010 levels.

"There already is enough export pipeline capacity for a reasonable ramp up in oilsands. You could double them and still not run out of capacity," said the report's author, David Hughes, a former scientist with the Geological Survey of Canada.

The more aggressive forecast Enbridge is using amounts to a "no-holds-barred liquidation" of the resource, when Canada ought to be coming up with a national energy strategy to develop it at a sustainable pace, Mr. Hughes said in an interview.

"It is one-time, it is non-renewable and it is irreplaceable, really."

The report said there's enough U.S. demand for Canadian energy exports. Canada provided just under a quarter of U.S. energy imports in 2010, with the rest coming from countries such as Saudi Arabia, Nigeria and Venezuela.

There's also a big push in the United States to buy less oil from unfriendly countries in the name of energy security, and supplant those volumes with crude from friendly, democratic Canada.

"There's lots of room to import more Canadian crude," said Mr. Hughes, who said Canadian oil is likely to find its way to the U.S. Gulf Coast over the next few years through Enbridge proposals, or through part of TransCanada Corp.' s controversial Keystone XL pipeline.

The report also makes the case for Canada keeping more of the resource for itself instead of sending the raw product overseas. Canada is a big oil consumer and parts of Central and Eastern Canada rely on imports from overseas to meet demand.

"I think we really need to look at the longer term energy security picture for Canadians, which we certainly aren't now," said Mr. Hughes.

Northern Gateway spokesman Paul Stanway declined to comment in detail on the ForestEthics report, as it going to be submitted as evidence to the review panel, which begins hearings in January.

"We have to show some respect for the review process that we're part of," he said.

More generally, Mr. Stanway said there is a commercial case for Northern Gateway, evidence of which Enbridge has filed to the panel.

"We would not be spending this amount of time, effort and money in pursuing something that was not needed," he said. "We're the people with money at stake here."

The strategic rationale for Northern Gateway often gets overlooked in the debate, he added.

"Regardless of any argument over pipeline capacity within North America, what Gateway offers is a route to the rest of the world, which would have a significant impact on getting full value for what is Canada's most valuable export."

Last week, researchers with the University of Calgary released a study that said expanding pipeline capacity to international markets should be a national priority and that lack of access puts Canadian producers at a disadvantage.

That report said allowing Canadian crude to access Asian markets via projects like Northern Gateway would help Canadian producers garner nearly $14 more for each barrel of oil they produce by 2030 — a figure Mr. Hughes disputes, and said would actually be more like $2 to $3, tops.

The University of Calgary report said improved market access could add $131-billion to Canada's gross domestic product between 2016 and 2030 and contribute $27 billion more in federal, provincial and municipal taxes.

Part of the reason Canadian crude trades at such a discount to international varieties is a supply glut at a storage hub in Cushing, Okla. Enbridge has proposed projects to drain some of those supplies to Gulf Coast refineries thirsty for Canadian heavy oil, as has rival TransCanada through the southern stretch of Keystone XL.

Those projects should get Canadian producers a better price for the barrels they produce, regardless of whether there is an outlet to Asia, said Mr. Hughes.

"If we're getting paid world price, I'd say it doesn't really matter where we sell it," he said.

"As long as we're selling it at a competitive price — which is world price, less transport costs — the U.S. Gulf Coast is no different than Asia."

new
Blocking pipelines to B.C. would entail loss of billions: study
May 8, 2018 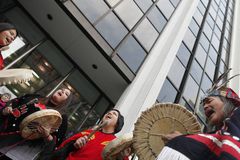 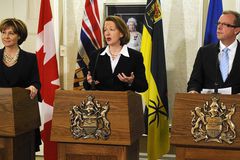 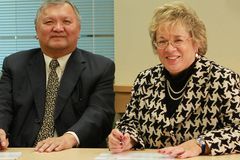