For years you've thought that the acronym "U.S." has stood for "United States." Perhaps. But it also stands for "Unexpected Surcharge." It's no secret that the U.S. estate tax will apply to U.S. citizens, permanent residents of the U.S., or green card holders. But suppose you're none of these. You're a Canadian citizen and resident. Perhaps you've never even set foot in the U.S. The fact is, you could still be liable for U.S. estate tax if you're not careful.

The U.S. estate tax will apply to anyone who owns "U.S. situs property," which includes U.S. real estate, almost all personal property located in the United States (vehicles, boats, art, jewellery, etc.), shares in U.S. corporations (including those held in your registered plans), U.S. debt obligations (government bonds, receivables from a U.S. person or company, etc.), and U.S. intangible properties (contractual rights, trust interests, patents, trademarks, and so on).

Here's the problem: As a Canadian citizen and resident, you'll face estate tax on your "U.S. situs property" (U.S. assets) at the same rates as U.S. citizens. This means you could pay a tax as high as 35 per cent of the fair market value of those assets at the time of your death.

The news isn't all bad. If your total worldwide estate is worth less than $1.2-million (U.S.) at the time of your death, you won't face the U.S. estate tax on most assets that would normally be considered U.S. situs property. You will, however, still face the estate tax on U.S. real estate, so some planning may still be necessary.

There's more relief. You may also be entitled to two potential tax credits that can fully or partially offset the U.S. estate tax that would otherwise be owing. The first is the "unified credit." This tax credit is more generous for U.S. citizens than it is for Canadian citizens or residents. The tax credit is based on a $5-million exemption amount. That is, the estate tax owing on the first $5-million of the estate is offset completely - if you're a U.S. citizen. For those who are Canadian citizens or residents, this tax credit is prorated according to the percentage your U.S. assets represent of your total worldwide estate.

There's a second credit that may be available: The marital credit. If you leave your U.S. assets to your spouse, you'll be entitled to an additional credit which will be equal in value to the unified credit. So, you'll be doubling your total credits. These two credits together will often be enough to offset your U.S. estate tax hit - but a tax calculation should be done to be sure.

Finally, if your estate happens to be subject to U.S. estate taxes after these credits, a foreign tax credit might be available. That is, the U.S. estate taxes paid can be used to reduce your Canadian tax bill in the year of death to the extent you have to report taxable capital gains on those same assets when your final tax return is filed after your death.

It's important to calculate the potential exposure to U.S. estate taxes. If it's clear that you'll still be subject to the nasty tax even after the tax credits I've referred to, you may want to consider some additional planning to minimize the tax bite.

When it comes to U.S. marketable securities, consider using a Canadian holding company to hold those investments. A corporation doesn't die as you do, so you can sidestep U.S. estate taxes if the corporation is the owner. As for U.S. vacation properties, I like the idea of holding properties in a trust. The trust must be drafted properly to avoid the U.S. estate tax, so speak to a U.S. tax specialist.

Keep in mind, the rules and strategies I've referred to here apply to Canadian citizens and residents who may have U.S. estate tax exposure. The type of planning that U.S. citizens, permanent residents and green card holders should consider will be different. I've written in the past about some ideas for these folks: Consider my articles of Aug. 27, 2005, and Nov. 20, 2009, both available at waterstreet.ca. Uncle Sam's long arm can reach into your pockets
January 19, 2011 Reporting to the IRS from north of the border
January 12, 2011 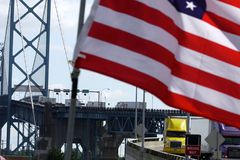 Getting a tax refund just means you've paid too much
December 15, 2010
Follow us on Twitter @globemoney Opens in a new window
Report an error Editorial code of conduct
Due to technical reasons, we have temporarily removed commenting from our articles. We hope to have this fixed soon. Thank you for your patience. If you are looking to give feedback on our new site, please send it along to feedback@globeandmail.com. If you want to write a letter to the editor, please forward to letters@globeandmail.com.
Comments