The last socially encouraged form of intolerance is directed at people who rent instead of owning a home.

If house prices keep rising, we'll need to get over this narrow-mindedness. In expensive real estate markets, it's both common and accepted that a majority of households rent.

Canada's home-ownership rate was 69 per cent in the latest national household survey from Statistics Canada (for 2011), up from just more than 60 per cent in 1971. That's one of the highest rates of home ownership in the world among major industrialized countries. The United States recently clocked in at 63.5 per cent, while Britain and France have been in the area of 65 per cent and Germany about 53 per cent.

Renters: Here's a way to cash in on those profiting off you (for subscribers)

Trump's win is a game-changer for mortgage strategies in Canada

Is your mortgage killing you? Here's how to find out if you're house poor

It's a core value of our society that people own a home. That's why the government of the massively indebted province of Ontario just doubled a tax break for first-time home buyers. But there's no getting around the fact that as house prices climb, the home-ownership rate will fall. The result is more renters.

One of the justifications for high house prices in Toronto and Vancouver is that they are what the urban studies guru Richard Florida calls superstar cities. They draw in people and capital from around the world and thus have the economic fundamentals to justify expensive houses.

Households in superstar cities rent more than they own. An article Mr. Florida wrote earlier this year talks about the rise of renting in big cities and tech hubs. Renters accounted for almost 57 per cent of households in New York, roughly 54 per cent in Los Angeles and San Francisco. The ownership rates in Toronto and Vancouver were 68.3 and 65.5 per cent, respectively, according to 2011 data published by Canada Mortgage and Housing Corp.

Those are high rates of ownership, but they're well behind places such as St. Catharines, Ont., where the rate was 74.5 per cent, or Saint John at 71 per cent. Home ownership does best in places where houses are affordable for a wide slice of the population. The average house price in Saint John last month was $178,673, while for St. Catharines it was $320,919. The average price in the Greater Toronto Area hit $762,975 last month, and detached houses in the city proper averaged $1.3-million.

Statscan's most recent study of housing looked at home ownership by age. In households in which the primary payer of rent or the mortgage is under the age of 35, $60,000 in total household income is the threshold where people become more likely to own than rent. In Saint John, the average house price is equal to not quite three times that $60,000 income.

There's an old, probably obsolete measure that says a house is financially manageable when the price is up to three times household income. So while Saint John is affordable for lots of people, Toronto increasingly isn't. You'd need household income of more than a quarter of a million dollars to make Toronto affordable under the three-times-your-income rule.

Toronto Life magazine recently ran an interesting feature in which it looked at sales transactions going back 50 years for three houses in the city. Prices soared, of course. But the more important story is the shift away from working-class owners to professionals and executives. One inner-city house was bought by a hospital worker and his wife in 1966 at $31,000 and was most recently sold to a lawyer and writer at $1.25-million.

Those who cannot afford to own houses in the city have recourse – they can buy in the suburbs and commute to work, scale down to an urban condo or share a home with friends or family. A lot will just rent, and that's sensible. Even as rents rise in cities with strong real estate markets, the total cost of accommodation is a lot lower than owning a house. Money saved as a renter can be used to build investments that offer comparable wealth to a paid-off house over the long term.

High house prices are supposed to be a sign that Toronto and Vancouver have earned their way onto the list of elite places to live. Don't believe the hype. In a world-class city, there's no smug prejudice against renting.

Buying a condo? Be aware of monthly fees and repair costs
November 3, 2016
Is your mortgage killing you? Here’s how to find out if you’re house poor
October 26, 2016 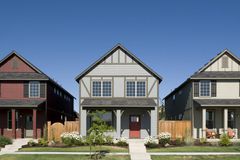 Parents shamed for living in a tiny home
November 18, 2016
Follow Rob Carrick on Twitter @rcarrick
Report an error Editorial code of conduct
Due to technical reasons, we have temporarily removed commenting from our articles. We hope to have this fixed soon. Thank you for your patience. If you are looking to give feedback on our new site, please send it along to feedback@globeandmail.com. If you want to write a letter to the editor, please forward to letters@globeandmail.com.
Comments