This housing story is part of our enhanced Generation Y coverage, designed to help millennials navigate their finances. Check it out here or #genYmoney. You can also join The Globe and Mail’s Gen Y Money community on Facebook.

Soaring home prices in major Canadian cities have priced many millennials out of the market, leaving them scrambling for alternatives and making the country’s big labour centres less viable.

And as millennials search for affordable housing, that has driven up real estate prices in outlying areas and made it even harder for potential home buyers to find a house.

The average home price neared $1.1-million in the greater Vancouver area and jumped above $700,000 in Toronto.

But prices are also climbing in the surrounding regions. Areas that were once considered cheap, such as Scarborough, Ont., are now expensive.

Rashmi Mohanty and his wife unsuccessfully bid as much as $575,000 on more than a dozen houses in Scarborough before changing course. Anxious to get into the housing market, they decided to buy an investment property. They borrowed cash from their family for a $650,000 three-bedroom house in North Toronto that they share with students to help make ends meet.

“That was the only option,” said Mr. Mohanty, who has the master bedroom and rents the other two rooms to students. “We don’t plan to stay here forever. I don’t like the situation, but that is how it is,” he said. 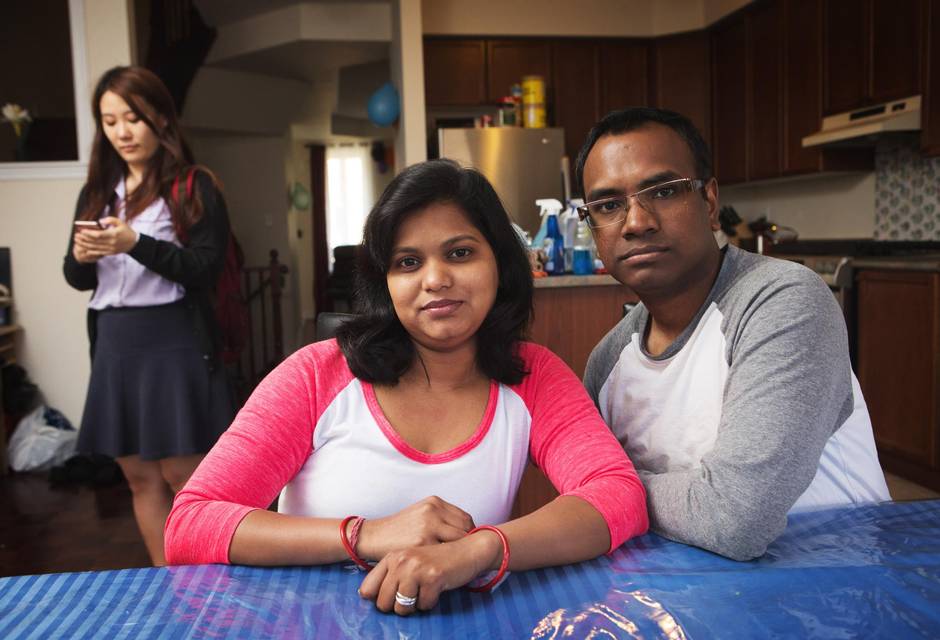 Madhusmita Santy and Rashmi Mohanty bought a house near York University and rent out their extra rooms to students. They are seen with their current tenant Da Woon Jeong. (Jennifer Roberts for The Globe and Mail)

Mr. Mohanty, 31, said he had no choice but to stay in Toronto because it is one of the country’s most vibrant job markets.

“Even if I lose my job, I won’t lose the house as the rental income will help pay down the mortgage,” he said.

In the Greater Toronto Area, the average price of a residential property (which include condos and houses) has more than doubled to $739,082 over the past seven years, according to the Canadian Real Estate Association. In the Vancouver region, prices have also doubled, to $1.09-million, according to CREA.

While house prices are surging, wages are not. A person 25 to 34 years old earns on average $935.75 a week, according to Statistics Canada’s 2015 data. That is 2.8 per cent higher than the previous year and a 15-per-cent increase over seven years.

“They are being squeezed,” said Benjamin Tal, deputy chief economist with Canadian Imperial Bank of Commerce. “They are priced out of what they want. We are seeing some kind of compromising.”

Some millennials are saying goodbye to the big city and moving to other parts of the province. They are finding new jobs or negotiating to work from home. Toronto has lost the highest number of young people since 1999-2000 and Vancouver has lost the most since the Great Recession, according to Statscan’s latest intraprovincial migration data.

The flip side: More people in their 20s and 30s are heading to the suburbs and farther afield. Statscan data show millennials moving to areas outside Toronto and Vancouver, such as Oshawa and Barrie in Ontario and Kelowna in British Columbia.

Matt Gregson is one millennial who moved to Kelowna after being priced out of Vancouver. With the average price for a detached house in the city nearly $3-million and home prices above $700,000 in the city’s outskirts, Mr. Gregson and his family had no hope of finding a place under their $475,000 limit. “I love Vancouver. But I’m not going to live there at all costs,” he said.

But even in Kelowna, where real estate values are quite a bit less than Vancouver’s, the 32-year old Mr. Gregson could not find a house within his budget. Located in British Columbia’s interior, the city has become Canada’s fastest-growing community because of a flood of millennials. Mr. Gregson ended up with a house just outside the city.

The influx of people to places such as Kelowna, which is part of the Okanagan Mainline Region, has sent average house prices up 10 per cent to $434,512 in one year. In the Fraser Valley, located east of Vancouver, prices are up 30 per cent to $702,755 in a year, according to CREA.

“It is frustrating to know that owning a house in Vancouver might not be possible. We might be renting for the rest of our lives,” said 23-year-old Oliver Schmidt, who is in his third year at the University of British Columbia and lives at home with his parents to save on rent.

It’s the same story in regions surrounding Toronto. In Barrie, the average house price has skyrocketed 45 per cent to $403,019 over six years, according to CREA. In Hamilton, prices have jumped 55 per cent to $483,281 over the same period. Hamilton, which has suffered from the steel industry’s demise, has become the new frontier for bidding wars, with some houses selling for $100,000 over the asking price.

Regardless of the rising real estate values, rock-bottom interest rates have made it easier for buyers to take out mortgages.

Data show that the majority of first-time home buyers in Canada are now millennials compared with five years ago, when they accounted for less than half of the new purchasers, according to an Environics Research Group/Genworth study. CIBC, one of Canada’s largest mortgage providers, is seeing more millennials taking out mortgages with the bank.