If you think talking with your teens about sex is awkward, try money.

Seriously, try it. Your kids actually want to hear you tell them about how money works, a new survey shows. In fact, they'd prefer to get the facts of life from you as opposed to smartphone apps, online help or financial literacy curriculum at school.

November is Financial Literacy Month, which means more repetition of messages about controlling debt, saving more and the wonders of budgeting. Some progress is being made on FinLit. For example, the national savings rate is roughly double what it was in the years before the financial crisis of 2008-09, despite low interest rates. But soaring debt levels are a concern, particularly now with some mortgage rates edging higher. FinLit hasn't made a dent in the debt problem so far.

How can we do better in teaching financial literacy? One thought is to modestly ease up on the preaching about living within your means and attack the specific questions people have about money.

A good start on this was made recently by the non-profit Canadian Foundation for Economic Education, which promotes financial literacy among young people and has worked with my colleague Roma Luciw and me in presenting FinLit sessions on university and college campuses.

The CFEE asked 6,059 kids in Grades 7 through 12 (ages 12 to 17) what they wanted to know about money, and who they wanted to learn this information from. The results suggest teens have a gratifyingly practical attitude toward money and therefore should be easily teachable.

Just over 60 per cent of students in the survey said they most wanted to learn about money matters at home from parents or guardians. Learning about money from teachers in school was next at almost 54 per cent, followed by guest experts at school. Tech-based solutions like apps, interactive games and online sources generated unenthusiastic responses. (Participants were allowed to pick more than one answer per question.)

When students were asked what money topics they most wanted to learn about, the top response was the best ways to prepare for earning money and getting a good job and career. "Youth would like more attention paid to helping them 'earn money' than is often assigned by financial education programs," the CFEE's summary of the survey results says.

Preparing for a career is a great example of how FinLit messages can deviate from the script about spending and saving to tackle the subjects that students want to hear about. Parents, teachers or guidance counsellors could start by looking at the job prospects and starting salaries in various professions, the university and college courses you need to take and the cost of such programs. Next, they could look at how to make good spending decisions and ways to save money once you're working. Those topics ranked second and third on the list of what students want to learn about.

Some advice for parents talking to their kids about money: Go easy on the generalized preaching about debt, saving and, God help us, the wonders of compound interest. Instead, listen to the kids in the CFEE survey and keep things specific and topical.

Use a summer or part-time job to discuss saving for short- and long-term goals. When thinking about colleges and universities, look at the family's resources for affording various programs and compare them to the cost of going to school in town and in another city. Another thought is to invite teens to ask you any money questions they have. Tell them about your own successes and mistakes with money.

Students' preference to hear about money from parents is instructive in a couple of ways. For one thing, parents are unbiased and independent in that they don't sell financial products. The survey shows students were not eager to hear from the representatives of financial institutions, which shows good judgment. Another lesson is that parents are also familiar and physically present – this suggests there are limitations in how effective online and smartphone apps can be in teaching money skills.

Being the parent of teens means you're bound to have moments when you're just not communicating. Surprisingly, money might be the topic that brings you together. 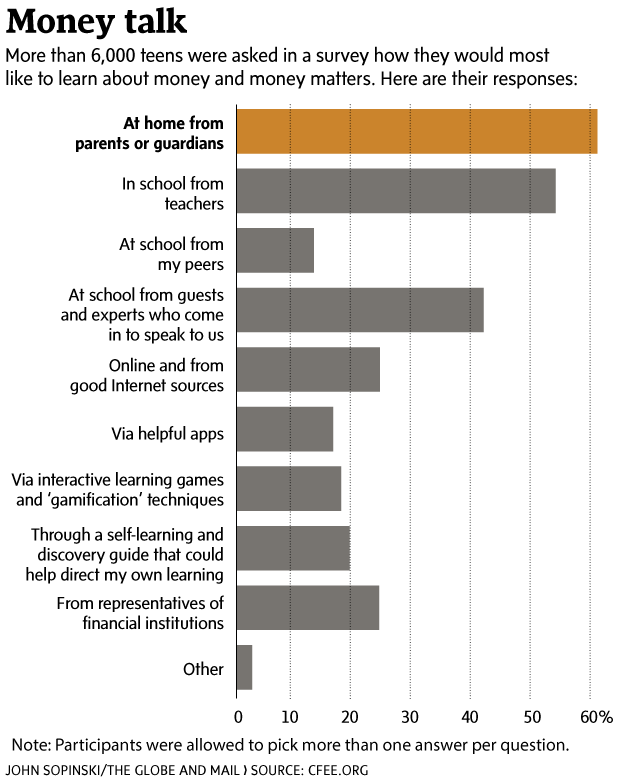