To Louise Wickson and Les Horswill, the house they shared for 22 years in mid-town Toronto always felt spacious.

But when husband and wife both started working at home, the house suddenly became much, much smaller.

"We each needed offices," Ms. Wickson says. "We had to make rules of engagement about disturbing each other."

And soon enough, Ms. Wickson says, with two adults in the house 24/7, the couple acquiesced to another Canadian rite of passage: It was time to renovate.

In cities across the country, dumpsters are arriving in driveways to accommodate changing lifestyles and shifting real estate markets. In Toronto, a dearth of houses for sale and a zealous attachment to a singular street or neighbourhood have driven many homeowners to renovate the homes they already own. In Vancouver, soaring prices are pushing the traditional move-up buyer to the sidelines. And in Calgary, a correction in the housing market is causing many homeowners to call in the trades while they stay rooted in place.

While the market dynamics are different, in all three cities homeowners need to decide what the reno costs will enrich - their lives or the resale value of the property.

In the case of Ms. Wickson and Mr. Horswill, they thought about moving to a condo with a more commodious layout. But they love their verdant street, their nearby friends and the summer ritual of a backyard barbecue.

"No condo would let us have all of that."

They brought in Toronto-based architect Martha Dorion and builder Scott Harper of Harper House Contracting to turn their third floor from a family room into separate offices.

That led to reconfiguring the first floor so they could more comfortably relax and entertain in the living and dining rooms. And the kitchen that they had replaced 22 years earlier? That was still just fine, in Mr. Horswill's opinion. But the cabinet configuration did not suit the new plan for the ground floor. And besides, the kitchen was looking tired, pointed out Ms. Wickson, in persuading her more conservative husband.

Ms. Dorion, the architect, has a busy practice helping clients to see the possibilities in renovation. Indeed, she so often accompanies her clients on their house-hunting trips that she has studied to become a real estate agent and recently joined a boutique brokerage.

Ms. Dorion has watched homeowners' expectations change over the years. Even newly installed kitchens are often torn out if they don't coincide with the tastes of new owners. And many clients put additional bathrooms as the top priority.

"People grew up with one bathroom for six people," she says. "Parents don't share bathrooms with their kids any more. It's quite amazing."

Ms. Dorion says renovation budgets commonly range between $300,000 for a relatively small addition and a new kitchen to $1-million for a thorough renaissance.

The architect advises homeowners with a limited budget to invest in a well-built structure with good-quality windows and stalwart appliances instead of expensive finishes. She favours old-fashioned serveries for people who like to entertain and humble walk-in pantries for chefs who need lots of space.

"It's a great way to get a lot of good storage at a really great price."

An Ipsos Reid survey conducted for Royal Bank of Canada last fall found that 55 per cent of homeowners plan to renovate or make improvements this year. The average that homeowners plan to spend is $10,064, which is an entire bathroom for some and an egg-shaped bathtub for others.

The Appraisal Institute of Canada offers an online guide which helps homeowners calculate the average return on their investment in a renovation project.

Swimming pools, home theatre rooms and interlocking brick driveways yield only 25 to 50 per cent. The payback for installing central air conditioning ranges widely, from 25 to 75 per cent. Putting in a skylight may turn out to be a waste of cash, with the estimated return varying from zilch to 25 per cent at the most.

Builder Doug Campbell of DC Construction Ltd. believes the hectic pace of the real estate market in the Toronto area this spring is also driving the reno business. He has been on a stream of visits with real estate agents and potential purchasers who ask him to look over houses before an offer even goes in. How much will it cost to replace that antiquated knob and tube wiring, they wonder, or add a family room with a master suite above?

"When there's a lot of turnover and people are buying, they always want to do work."

Mr. Campbell's rule of thumb, when owners ask for his advice, is that about 75 per cent of the money spent on a substantial reno will boost the home's value. The other 25 per cent is an investment in the intangible - warm floors underfoot, extra counter space or a view to the garden.

He asks new clients about their plans for the next five to 10 years, because that will determine where they should invest the most cash.

If clients plan to sell again within a few years, Mr. Campbell recommends that they hold costs down on five-star items such as satin-polished nickel faucets where a more economical choice will do.

Homeowners have become much more energy-conscious in recent years, he finds, so people often call on him to bulk up the insulation. Eco-friendly features such as tankless water heaters are increasingly popular.

In Vancouver, ReMax broker David Campbell says the market for townhouses and condos has started to slow after a stretch of torrid sales. But a lack of inventory means that potential buyers are competing for single-family houses in the more popular neighbourhoods.

If people have a solid income, they will pay a rich price for the coveted single-family house that is move-in ready. "They're paying a premium if it was done with city permits."

Nineteen times out of 20, he says, it's cheaper to tear down a tiny bungalow than to build an addition, raise the roof or finish the basement. But many older houses need updating.

Mr. Campbell counsels homeowners who are preparing a house for sale to look at each room in the context of the entire property. He recently evaluated one house where the owner had invested in lovely landscaping and fresh decor. He was startled to walk into an overwhelmingly blue bathroom that seemed to belong to another era.

"If you go and change one thing, you're going to make other things look dated by doing that. You've got to look at the rest of the package."

He urged the homeowner to update the bathroom because, in Mr. Campbell's opinion, that reno is a fast and inexpensive way to make a house more appealing, whereas installing a kitchen for a quick turnover does not pay off.

"With the cost and time of putting one in, you'll miss the spring market."

Calgary-based interior designer Monica Stevens says the uncertainty surrounding the housing market in that city is bolstering the renovation business.

Some homeowners have watched the value of their properties fall from the lofty levels of recent years, so they have decided not to settle in for the long term and create a house they love. Others are taking advantage of a cooler market and buying a second house without even attempting to sell the first.

"Both groups are capitalizing," said Ms. Stevens from San Francisco, where she was accompanying a client on a shopping excursion.

Ms. Stevens says kitchens and bathrooms are still the rooms most often chosen for renewal, but she is seeing a move away from one large, combined kitchen and family room back toward more delineated space.

Many people who tried cocooning with the whole family in a great room are now clamouring for some space of their own, which illustrates another caveat: It can be unwise to follow a reno trend just because all of the neighbours are doing it.

When the economic downturn hit Calgary, Ms. Stevens says, trades became more available, and homeowners have become immersed in new projects. Among her clientele, many are splurging on luxurious fixtures and finishes.

"Once they get going on a renovation they make a full commitment," Ms. Stevens says. When the walls are torn open, the house is filled with drywall dust and the family is living in a rental apartment around the corner, clients want to be rewarded with a beautiful house at the finish.

"You're only going to do it once." 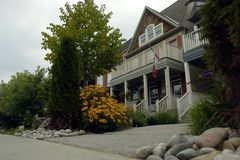