It's going to look bad on the banks if this borrowing binge we've been on for a few years goes south.

Maybe that's why a couple of them are trying to encourage people to save money as well as borrow it. The sum of original thinking from big banks on savings accounts in the past 10 years could be written on a napkin, with lots of room left to wipe French fry grease off your hands. Now, things are changing.

Bank of Montreal's Savings Builder Account starts with a base rate of 0.3 per cent and adds bonus interest of 1 per cent if you increase your balance by $200 or more a month. Bank of Nova Scotia's Momentum Savings Account rewards people with more than $5,000 to save. They start at 0.75 per cent interest and can move up to 1.5 per cent if they stay above $5,000 and make no withdrawals for 90 days.

Mr. McVay sees the Scotiabank account as the more appealing of the two because it gives you a base rate of 0.75 per cent on balances above $5,000. That's considerably more than BMO's 0.3 per cent for clients who don't save $200 or more a month.

Now, let's get real about banks and savings accounts for a moment. First off, banks aren't being altruistic in offering higher-voltage savings accounts. Funds parked in these accounts are lent out to bank clients, and much money is made in the spread between what's paid on savings and what's charged on loans.

Second, the country needs help controlling debt levels more than it needs enticements to save. Banks are in the business of lending, of course. But the sense I'm getting from hearing people describe interactions with bank staff lately suggests there's a certain heedless aggressiveness in the way lines of credit are being pushed on customers. Banks need to figure out a way to develop a sustainable borrowing strategy for clients.

Finally, there are plenty of competitors to the big banks paying more than 1.5 per cent, without strings. You can deposit as much money as you want, when you want – and you can withdraw money without prejudicing your interest rate.

High-rate savings accounts are great receptacles for money you need to keep intact, be it a house down payment or an emergency fund. The only reason to keep this type of savings at a big bank is to allow for instant shuffling of money between savings and chequing accounts. Big bank high-rate accounts typically charge you for bill payments or debits, so the ability to quickly move money into your chequing account is handy. But the better rates at alternative bank and credit union savings accounts are worth the minor inconvenience of having to wait one to three days for transfers to arrive in your chequing account.

The BMO and Scotiabank accounts also address the banking industry's problem of not just attracting clients to savings accounts, but also retaining them. To get the high rate, you have to keep saving, or at least not take any money out. Other banks have offered temporary teaser rates to clients, but this strategy has produced a savvy new generation of savers who park money with a bank only as long as the high rates apply. When the teaser rate ends, money gets moved to a higher rate bank.

The online bank Tangerine (owned by Scotiabank) has recently tried to keep clients from defecting after the expiring of their teaser rate by telephoning them directly. One Globe reader reports that he was called by Tangerine and offered 3 per cent for 180 days on money he had deposited with the bank as part of a promotion that was about to expire.

The lesson here for people getting temporary teaser rates: Ask for more when your deal expires. 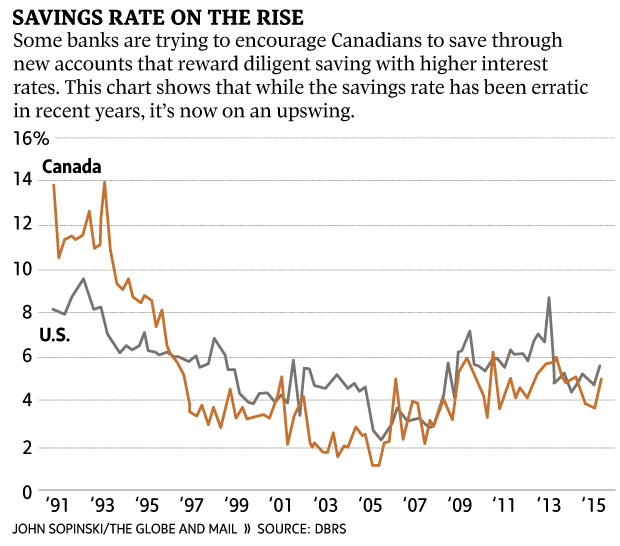