In this blog, I often focus on the fundamental tenets of personal finance - how to spend smarter, save more and stay out of debt. Most of us, me included, believe that sticking to these solid rules will give us the financial freedom to enjoy retirement one day. We think that through hard work and a disciplined budget, our family's present and future will be secure. According to Steve Siebold, these closely held principles are keeping me and the middle-class masses, as he calls us, from getting rich.

"I think they're great fundamentals and that's what most of us are taught," says the professional speaker, consultant and author. "But people that are wealthy develop a consciousness besides just eking out a living and paying debt."

In his new book, How Rich People Think, Mr. Siebold lists 100 ways the wealthiest 1 per cent of the population are different from the rest of us. The common thread he found after interviewing hundreds of millionaires is that the way the "world class," as he calls them, thinks about money is at complete odds with the view of the average working Jane and Joe.

For Mr. Siebold, who grew up firmly in the middle-class camp and says he is now a member of the elite he writes about, the first step toward wealth is changing your attitude toward it. Most of us see money through a lens of fear - a fear of losing money or our ability to earn it - and so focus on saving and protecting what we have. People who become rich, he says, view money through a filter of opportunity, constantly looking for problems to solve and ways to financially benefit.

"The masses are so focused on clipping coupons and living frugally, they miss major opportunities," he writes in the book's first chapter. "Even in the midst of a cash flow crisis, the rich reject the nickel and dime thinking of the masses. They are masters at focusing their mental energy where it belongs: on the big money."

To Mr. Siebold, the big money lies in new ideas, which he believes are the foundation of all self-made wealth. "I think that most of the ideas that the wealthy have don't work, but you only need one good one and then you're set for life."

So that guy you know who is always coming up with kooky get-rich schemes? Turns out he may be on the right track, says Mr. Siebold. "People might think they're crazy one day and then they make millions. Most people play the lottery and they think that puts them in the game. The way the wealthy play the game is they come up with ideas."

Coming up with the next great idea isn't just the domain of the super-educated or extra intelligent, according to Mr. Siebold. "Most of the millionaires I've interviewed are street smart. There's nothing wrong with education, but you don't need to be a Yale, Harvard or Wharton grad. Solve a really big problem for a lot of people and you get rich."

Opportunities for getting wealthy are especially abundant during difficult economic climates, such as the one we're now experiencing. As the global economy shifts in unpredictable ways, Mr. Siebold says, the fear that the average person typically feels about money has become sheer terror. "When people are scared, they look at the small picture, at the next step," while the rich are thinking about the long term and identifying new problems to solve.

In reading Mr. Siebold's book, it occurs to me that a certain level of obsession is needed in order to become wealthy and that perhaps this is an innate instinct I do not possess. I seem to be content to pay my bills and have some left over for a summer holiday. Maybe I'm just made to be middle-class?

Mr. Siebold disagrees. He thinks our attitudes toward money are learned behaviours that can be changed. While not everyone will become wealthy with an attitude makeover, everyone has a chance at it.

"My dad was a bricklayer and I learned that you should just be glad to have a job," he says. "That will just get you by, which is fine. But you only have one life to live. Why not be rich?"

Read an excerpt from How Rich People Think. 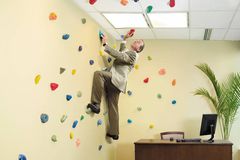