Pete Breese remembers seeing a leather jacket he wanted to buy – but not pay full price for – in a store when he was a teenager, so he asked for a discount and walked away with his new purchase shortly after.

"Ever since then, I realized that you can haggle just about anywhere," he said – and he's continued to do it "all the time."

It may seem like haggling is confined to car dealerships, Kijiji sales and travels abroad, but that doesn't have to be the case. Few prices are non-negotiable, say seasoned hagglers, and people shouldn't fear asking for a discount almost anywhere so long as they follow the proper bargaining etiquette.

"There's always room," says Mohammed Halabi, director and founder of MyBillsAreHigh.com, which negotiates down the cost of individual and business phone, Internet and TV plans.

The only exceptions, he quips, are gas and hydro bills. All other companies – like furniture retailers, hotels or electronics dealers – are fair game, he said.

"There's room for those places to, you know, either sweeten up the deal or get a reduction in cost," Mr. Halabi said. Instead of a price cut, consumers could ask a hotel for a free upgrade or petition a telecom provider to add in more data without an extra fee. To secure any deal though, a customer must first ask and there are some ways to help ensure that goes smoothly.

The best way for someone browsing to start a negotiation is to mention how much they love an item, said Mr. Breese, who now owns Eclectic Revival, a vintage and custom lighting store in Toronto where it's acceptable to bargain rather than just pay what's scrawled on the price tags.

"When I see somebody being enthusiastic about a piece [it] is definitely going to soften my heart," he said.

A polite demeanour is also a must. Recently, Mr. Breese stopped engaging with a man who repeatedly demanded he sell an item for $100 less than its price after Mr. Breese had already said the most he was willing to drop it by was $75.

On the flip side, trying to bring down the price by pointing out flaws on an antique is likely to backfire, he said, because it could offend the seller, who is likely aware of any nicks already. It's also important to be knowledgeable, said Mr. Halabi, who believes his years of experience selling services on behalf of telecom providers give him an edge in securing the best deal.

If shoppers don't see any success from speaking to a salesperson, Mr. Halabi suggests escalating the matter by requesting to speak to a manager, who may have more leeway. Customers must also be reasonable about what they're asking for.

"Rule of thumb is ... try not to cut somebody in half," said Mr. Breese, adding it's acceptable to start by asking for a 20-per-cent to 30-per-cent discount.

But not everyone wants to start a negotiation, and anxiety around haggling is common. A recent survey commissioned by AutoTrader.ca found nearly one out of five respondents said they were holding off from purchasing a vehicle because they feared negotiating over price.

Mr. Breese said there's little reason to feel nervous about haggling – a conversation that typically takes only a few minutes in his shop.

"The worst thing they can say is no."

Great customer service is critical to business success
November 9, 2016
There are options for those who hate haggling to buy a car
February 4, 2016 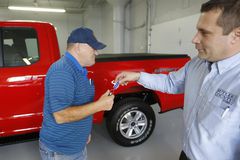 How to take the stress out of car buying
December 2, 2015 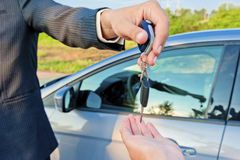