Your latest financial worry: The global economy is starting to get back to normal.

It means Canada's 15 minutes of fame as a model of economic fortitude to the world are done. The U.S. economy looks to have better growth prospects, and investment dollars are flowing there instead of to us. As a result, our dollar is no longer the darling it was during the financial crisis.

There are some moves you can make as an investor to profit from this shift, but your day-to-day finances are vulnerable. "For households, the lower dollar is almost entirely a lose-lose proposition," said Philip Cross, a former Statistics Canada chief economist who has written a report for the Fraser Institute on the impact of a falling dollar on our economy.

A falling currency makes Canadian resources and products more affordable in a world where the U.S. dollar is the reference currency. It also encourages foreign investors to buy Canadian assets, and maybe to manufacture things here. And yet, Mr. Cross believes the net effect of a falling dollar is negative.

A key reason: A falling dollar means higher prices for things such as gasoline, natural gas for home heating and groceries like fruits and vegetables. Mr. Cross summarizes a lower dollar as "a pure loss of purchasing power."

Recently, Enbridge Inc.'s gas distribution arm asked regulators in Ontario for permission to jack up natural gas costs by nearly 40 per cent, starting next month. A cold winter has depleted Enbridge's gas stocks and it must replenish them with gas that costs more both because of rising energy prices and our falling dollar.

Petroleum products may just be where the falling dollar hurts households the most. Mr. Cross cites Statscan numbers that show Canadians spent $73.2-billion last year on gasoline, and another $10.9-billion on natural gas and home heating oil. By his math, a 10-per-cent drop in the dollar to 90 cents (U.S.) costs households $8.4-billion directly in higher energy prices, a 15-per-cent drop would cost $12.6-billion and a 20-per-cent decline would cost $16.8- billion.

As it happens, the dollar is down roughly 10 per cent from its level of a year ago. Mr. Cross says economists are notoriously poor at forecasting what's ahead for currencies, but he did offer this nugget: When the dollar builds momentum in one particular direction, it tends to overshoot. In other words, the dollar could fall more than it already has.

As an investor, you can profit from this – just own U.S. stocks or equity funds. A 10 per cent decline in our dollar boosts your returns in these assets by 10 percentage points as long as you don't own funds that use currency hedging to mute currency fluctuations.

Barry Schwartz, chief investment officer at Baskin Financial Services, said our weak currency is part of a greater argument for buying U.S. stocks. "If the Canadian dollar goes lower, you win," he said. "If U.S. economy improves, you win. If the Canadian economy improves, you might win as well. Canada's only going to do well if the U.S. does well."

Here in Canada, companies in the energy, mining and timber sectors are obvious winners from a lower dollar, Mr. Schwartz said. He notes that all commodities are priced in U.S. dollars, which means a falling Canadian dollar is like free money for resource companies.

Mr. Schwartz agrees that a falling loonie will affect the purchasing power of households, but he mentioned last month's strong retail sales as evidence that people are doing okay. "On one hand you're going to be pinched because of the lower dollar, and on the other good things will be happening to pad your pocket."

In theory, the same will apply to the next phase of economic normalization, which is interest rates rising from today's depressed levels. Savers and investors will benefit from higher returns when they put new money in bonds, term deposits and bank accounts, while people who owe money will pay more.

The question we have to ask ourselves about rising rates and a lower dollar is whether better results from our investments can offset higher costs from gas, groceries and debt repayment. With the household debt-to-income ratio still at record highs, the answer for many households has to be no.

An economy that is back to normal will generate jobs and help incomes keep up with or even exceed household expenses. But a lower-dollar, higher-rate world will be a nasty place for households with lots of debt and shaky finances. The story of middle-class financial stress has legs.

Economist Philip Cross uses 2012 average spending per household data to show the impact of a falling dollar on spending on gasoline. Average cost in 2012: $2,394

Bets against the Canadian dollar surge again
May 11, 2018 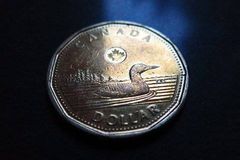 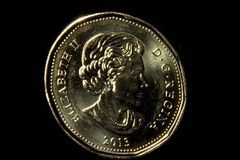 Dovish and less-dovish: How Stephen Poloz and Janet Yellen crushed the Canadian dollar
June 19, 2017
Report cites benefits of independent Quebec using its own currency
May 12, 2018 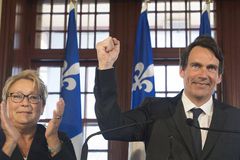 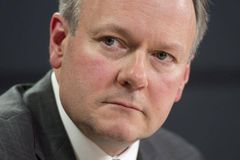