When Fiona Ackland-Wright and her wife purchased their first house in Ottawa’s upscale Glebe neighbourhood, she, like many first-time home buyers, was ready to tackle some do-it-yourself projects.

Looking back, she says those projects could not have been done without the help of the Ottawa Tool Library – a non-profit facility where members can borrow tools and learn home-repair skills, all at a fraction of the cost of renting or purchasing from a big-box store.

“It was fantastic to take on these jobs and have the tool library give us the tools we needed to do it,” she says. “Otherwise we would have had to rent them or buy them for a really high price, or hire a contractor who had them already.” 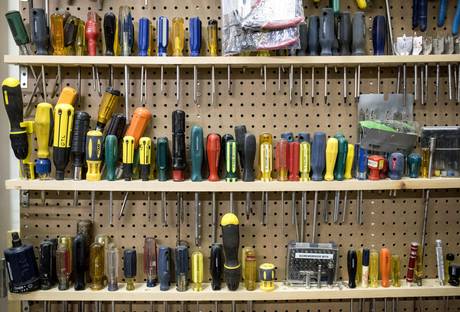 (Justin Tang for The Globe and Mail)

Ottawa’s Tool Library is one of 12 similar centres across Canada – including four outlets in Toronto – and has 290 members. The members pay $50 a year to gain unlimited access to an inventory of more than 900 tools, from table saws to screwdrivers. Tool owners can also donate their surplus or underused equipment to the libraries.

Tool libraries are in cities from Vancouver to Halifax, and three more are set to open before the end of March.

“There was a financial perspective that drove [our decision], but I really value the sharing economy as well,” she says. “I don’t think that producing these things for everybody to use once is a sustainable use of resources, so I think it’s great to be able to share them.”

Ms. Ackland-Wright and her partner, Cari Ackland-Wright, also borrowed large pots – enough to cook 100 pieces of corn on the cob – plus a coffee urn for their wedding this past August.

“Kitchen stuff are tools as well!” says Ms. Vollmerhausen with a hearty chuckle.

A long-time freelance translator, Ms. Vollmerhausen has cut down on that part of her career and now focuses almost full-time on her duties at the tool library, which is located on the upper level of Ottawa’s bustling City Centre business park near the west end of the downtown core. The tools are found on the wall and stacked on shelves, not unlike books at a regular library, in the space its shares with other construction-related businesses.

“This was a fun project initially, but I truly believe this is something we need. We as human beings need to live a much more sustainable lifestyle, and in order to do that we need to be sharing,” she says.

The library got off the ground after Ms. Vollmerhausen and fellow co-founder Frederic Sune took the idea to “Soup Ottawa” in 2014.

Soup is a community dinner event where guests pay $10 to have a meal, listen to presentations from startup community projects and vote on a winner. The project with the most votes gets to take home all the money the guests have donated.

One-hundred thirty people attended on the night Ms. Vollmerhausen and Mr. Sune presented. They managed to beat out five other ideas to earn $1,300 and a lot of local media attention. Ms. Vollmerhausen admits now they weren’t ready for the tidal wave of awareness. 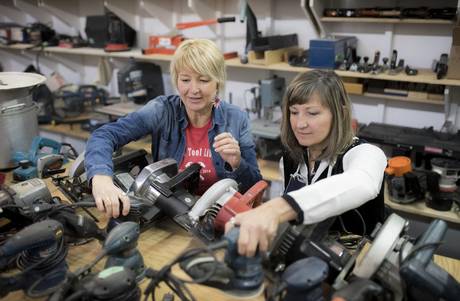 (Justin Tang for The Globe and Mail)

“[The money] was great – it got us some flyers and some business cards – but we had to pay rent, we had to get liability insurance, and we could only make money once we were open, but we couldn’t open unless we had those things,” she says. “That’s where crowdfunding came in.”

A 30-day campaign on the crowdfunding portal Indiegogo earned the Ottawa Tool Library another $18,386 (easily surpassing its goal of $15,000). The campaign concluded April 25, 2015, and the tool library has taken off in popularity since.

“It’s really growing. It makes so much sense,” explains Ms. Vollmerhausen. “Everyone who hears about it says, ‘Oh my gosh, yes! I have such-and-such in my basement and I’ll never use it again. I’d love to share it.’”

Ryan Dyment, co-founder of the Toronto Tool Library (with 1,200 members and nearly 13,000 tools available for rent), explains that people are attracted to the community and environmental aspects as well.

“We consider ourselves a community hub. As a community we can work together and share these things,” he says. “It’s like a community shed, and everyone stores things there.”

Mr. Dyment says the Toronto Tool Library could have been price-competitive with owning tools or Kijiji (where, he says, people can buy used tools fairly cheaply), but there were two reasons against that.

“It wouldn’t make a lot of sense, for one, and it wouldn’t fit with our overall ideology,” he explains.

Big-box stores are not struggling with the new competitor carving out a piece of their tool business. Home Depot, for example, reported revenue of $83-billion (U.S.) in 2015, up 5 per cent over 2014, and profit of $6.35-billion.

But for Ms. Ackland-Wright and her wife, there was never a thought to go to one of those stores, even when what started as a small project for their three cats – “We wanted to make them custom barn-door shelves to stop them from sitting on the kitchen counter,” she says – turned into a full home renovation.

“We couldn’t have done that without the tool library,” she explains.