The latest decline in interest rates has drawn fresh attention to how sad returns are for people with money in savings accounts, guaranteed investment certificates and government bonds. But a close look at financial data for the past two decades shows things are worse than we thought. If you factor inflation into your returns, you're actually losing money as a saver.

A quick example: While you could still get as much as 2 per cent on high-interest savings accounts in early February (Achieva Financial and Outlook Financial, ladies and gentlemen), most other financial institutions were right around 1 per cent, plus or minus a bit. Some big bank high-interest accounts paid 0.8 per cent, while the online bank Tangerine was at 1.3 per cent as of early this week. Inflation, as of the end of last year, was 1.5 per cent, which means people holding funds in these savings accounts have lost money on an after-inflation basis.

Was it ever possible to keep money safe and earn a decent return? For sure. Historical savings-rate data from Tangerine and long-term inflation numbers from Statistics Canada show an average real, or after-inflation, return of 0.8 per cent between 1998 and 2014. That's based on an average inflation rate of 1.9 per cent, and an average high-interest savings account rate of 2.8 per cent. There were years when real returns were close to 2 per cent or more, which is not bad for zero-risk money.

What's different today is that we're stuck in an unusual cycle of weak economic growth that has been holding interest rates down for an extended period. "The goal is to encourage borrowing and activity, and to discourage saving and idle money," said Eric Lascelles, chief economist for RBC Global Asset Management. "But there's absolutely no question there's collateral damage here. Savers are being punished."

The punishment is worse than anything we've seen in recent decades on a sustained basis. On average since 1998, investors had a real return of 1.6 per cent when buying five-year Government of Canada bonds. Early this week, with the five-year bond yield around 0.6 per cent and the most recent inflation reading at 1.5 per cent, the real return on this bond is decidedly negative. Five-year GICs offer a positive real return, but it's thin at zero to one percentage point.

There's another way savers and conservative investors are being penalized today. Normally, you get rewarded with higher returns for buying GICs and bonds with longer terms. But a five-year bond or GIC today offers only a tiny premium over a term of just one or two years. Example: The gap between Government of Canada two- and five-year bonds at the beginning of the month was 0.2 per cent; a year ago it was 0.6 per cent.

This may not make savers and conservative investors feel any better, but things could be worse. In countries such as Germany, France and Japan, government bond yields are negative right now without even considering inflation. Investors are essentially paying for the privilege of holding these low-risk assets.

Mr. Lascelles said returns for Canadian savers today are unusually low and will rise at some point. But there are two complications – one being that persistent economic weakness here in Canada and around the world will depress interest rates for a while yet. There's growing speculation that the Bank of Canada will cut its benchmark overnight rate by another 0.25 of a percentage point in March. If that happens, pressure builds for similar cuts in savings-account rates.

The other complication is that, with our population aging, we may not reach the levels of economic output that we saw in previous decades. If growth is more modest, inflation should be quieter as well. That's why Mr. Lascelles talks about only a "partial normalization" of rates.

Household savings rates suggest low rates are having an effect. After edging up to as much as 5.9 per cent in 2012 and 2013, the savings rate declined in the second and third quarters of last year to 3.9 per cent. It'll be months before we know what the current rate is, but falling interest rates probably pushed it even lower.

Low rates are meant to curb saving and promote spending and borrowing. But we need to think more strategically about saving. It's less about earning interest than it is about setting aside money that you can depend on in a financial emergency. That, in the end, is how savers save themselves. 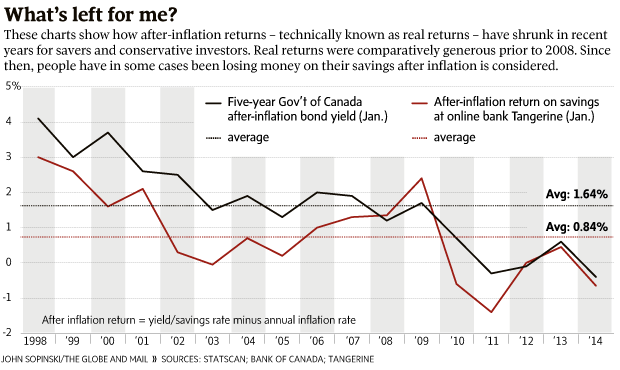