Split the bill or separate cheques? Greg Cook has tried both when he goes out to dinner with friends, and has come down decidedly in favour of separate bills.

"I absolutely despise bill splitting," says the 46-year-old, who works in tech sales in Kitchener, Ont. "It rarely works out in my favour and I always pay more, even if it's a few dollars."

Mr. Cook doesn't drink a lot of alcohol with dinner because he usually drives to the restaurant. Some of his friends do, however, which means "when the bill is split, me, the pop drinker, gets dinged." When friends say, 'Oh, we'll figure it out at the end,' Mr. Cook knows "those fateful words add $5 to $6 to my tab. It's like a tax. I get nothing tangible for the extra cost."

To split the bill or not is one of the thorniest issues of financial etiquette, one of the few that really divides the personal-finance experts.

Ask Kerry Taylor, the B.C.-based author of 397 Ways to Save Money, who runs a website on frugal living, Squawkfox.com. "I can't believe there's so much debate about how to pay for your meal when you're out with friends," Ms. Taylor says. "I always get separate cheques. It's a good way to ensure that you pay for exactly what you order."

Julianne Pekarthy, the California-based co-author of 'The Girls' Guide to Money Etiquette, counters: "Just split the bill. You're talking about a few dollars here. It's silly to take the time and energy off the focus of why you're there anyway, which is to have a good meal."

The only point of agreement between experts is that the issue can be divisive and often emotional. Among friends, it can cause resentment.

"We did a survey a couple of years ago, and found that 33 per cent of the public felt that, when friends go out to dinner, someone is always unhappy with how the cheque is divided," says Jeanne Fleming, who with Leonard Schwarz writes a King Features syndicated column called Money Manners. The column considers ethical issues surrounding money.

"Compounding the problem is the fact that so many people fume silently instead of speaking up when they think they're paying more than they should. In fact, our survey showed that two out of three people just grit their teeth and overpay."

And, as Mr. Cook discovered, tabs – and irritations – often grow because of alcohol. "We hear all the time from people who are resentful because they tend to order one drink while their friends routinely order three, yet want to split the cheque," Mr. Schwartz says.

"It seems these drinkers figure if the cost of the food comes out even, there's no reason not to split the cheque evenly. I don't know if it's the booze or just willful cluelessness, but something's impairing their reasoning."

Ms. Pekarthy, who devotes a chapter in her book to splitting the bill, acknowledges that ordering alcohol can raise the tab, but not as considerably as people think. She says while doing research, the authors did a lot of itemizing of restaurant bills to figure out whether it's worth it to just split the cheque. Their finding: "People always underestimate what they order and how much it costs."

And soft drinks and coffee really add up: "The differences were really nominal when you itemized it out," she says.

The major academic study done on the topic – "The inefficiency of splitting the bill," in the 2004 Economic Journal – came to the opposite conclusion, but for some very different reasons. The study found that people who dined out in a group spent more if they knew the group was going to split the bill evenly. If each person paid their tab individually, the group as a whole ordered less. If the group knew that someone else was picking up the tab, they ordered twice as much.

Uri Gneezy, a professor at the Rady School of Management at University of California San Diego, who was one of three authors of the study, says while the people in the study were strangers to each other, he believes the experiment would play out much the same among friends. But he also said cultural norms play a big part: "In Germany, they divide restaurant bills to the last penny. In Israel, doing that is considered bad manners. So people's backgrounds make a difference."

Most of the experts believe that asking for individual bills is becoming more of a norm in North America. Doing so is no longer considered an etiquette no-no.

"What may have changed ... is people's willingness to go along with splitting the cheque when it's clearly unfair," Mr. Schwartz says. "Tough times make for tougher people."

For Mr. Cook, asking for separate cheques is a relatively new normal. Three years ago, he and his friends would routinely split one bill; now, they get their own.

"It started to get to the point where, financially, it wasn't a big deal to split the bill, but it became more of a thing of principle. There's really been a shift in my social group." You can justify expensive shoes, but not as 'an investment'
April 26, 2011 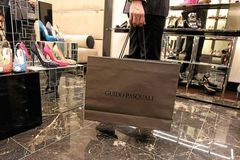