Millions of Canadian homeowners fork over insurance premiums every month for the comfort of knowing they will be covered if their house is damaged or destroyed by fire or other perils. It's the reason a home insurance policy is legally categorized as a "peace of mind" contract.

There is a little-known provision in the typical home insurance policy, however, that if fully understood may well keep homeowners up at night. This provision, which is usually found several pages into the proverbial fine print, reads as follows:

Material Change 4. Any change material to the risk and within the control and knowledge of the insured avoids the contract as to the part affected thereby, unless the change is promptly notified in writing to the insurer or its local agent …

These words may sound innocuous, but their effect can be draconian. That's because this provision imposes a continuing obligation on homeowners to notify the insurer of any change to their property that is "material to the risk" – basically, any changes that might have caused the insurer to increase the premiums or decide not to insure the property had the insurer known about it.

If the insured fails to make this disclosure, and his or her house is damaged or destroyed by fire or other peril, such as water damage, vandalism, lightning, explosion or hail, among others, that failure "avoids the contract" – meaning the insurer can treat the contract as retroactively void and not cover the loss.

Unfortunately for homeowners, the bar for what constitutes a "change material to the risk" is decidedly low. Changing how your home is used by, say, renting out a room to a tenant or starting to operate a home business would almost certainly meet the definition. But so can changes that may seem relatively minor.

In one case, a family in Coldstream, B.C., installed a wood-fired furnace as a secondary heat source in their newly constructed barn and greenhouse. The state-of-the-art buildings and their contents were then destroyed by fire before the owners had a chance to report the change to their insurer. The insurer refused to pay for the loss, citing the unreported material change, and the court ruled the insurer was squarely within its rights to do so.

Surprisingly, the insurer may be able to void the policy based on the unreported change even if the fire was caused by something entirely unrelated – and even if the change had been "undone" by the time of the fire.

In another notable case, a Cape Breton home was destroyed by fire after the owners had moved out of province with the intention of renting it out. While investigating the loss, the insurer came to learn that the home had been vacant for a brief period after the owners left, but was occupied by a family member at the time of the fire. Even though the home was occupied when it burned down, and the fire was not caused by the prior vacancy, the insurer refused to pay the loss. It argued the failure to report the vacancy was a material change – and the owners' failure to report it provided grounds to void the policy.

The homeowners sued the insurer and sought payment under the policy. While the owners were ultimately successful, the litigation went all the way to the Supreme Court of Canada, and took six years to resolve.

Fortunately, the Supreme Court ruled that the insurer could not void a policy on the basis of material change where it would be "unjust or unreasonable" to do so. While this decision is a helpful precedent for homeowners, there's still uncertainty as to what could be considered "unjust" or "unreasonable" in any given case.

The Supreme Court also obliquely suggested it might be time for the provincial legislatures to reform their province's insurance statutes to clarify the insured's obligations around reporting. To date, however, few provinces have shown interest in answering this call. This is a shame, as the current laws and reporting requirements are badly in need of an update.

Until such legislative changes are made, homeowners should consider regularly reporting any change to their premises that the insurer might consider "material." They might also want to call their insurance companies and ask what changes, exactly, they are expected to report.

Annoying and time consuming? Undoubtedly. But for the peace of mind of knowing insurance coverage will be there for them, probably a small price to pay.

Disclaimer: This is a high-level overview of certain general principles of insurance law and should not be construed as legal advice.

Gord McGuire is a partner with Adair Barristers, Toronto, practising in all manner of civil litigation.

Water damage is probably the biggest threat to your home. Are you protected?
March 30, 2017 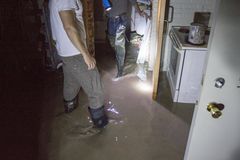 The time to check your home insurance policy is before the flood
May 10, 2017
Protecting high-value jewellery requires multi-faceted plan
July 20, 2017
Follow us on Twitter @globeandmail Opens in a new window
Report an error
Due to technical reasons, we have temporarily removed commenting from our articles. We hope to have this fixed soon. Thank you for your patience. If you are looking to give feedback on our new site, please send it along to feedback@globeandmail.com. If you want to write a letter to the editor, please forward to letters@globeandmail.com.
Comments