A country doesn't build up as much debt as we have without some seriously delusional thinking.

As flawed as these justifications are, they bow to the idea that there is such a thing as good debt. There isn't. The sooner we start thinking critically about this last-century concept, the better.

There are three kinds of supposedly good debt: Mortgages, investment loans and student loans. Borrowing for each of these purposes can be a rational thing to do, and you may end up wealthier as a result. But there are too many pitfalls today for any one of them to qualify as a no-brainer financial decision.

Mortgages are the most harmful manifestation of the good debt mindset because their dominant 71-per-cent share of household credit. The argument is that a mortgage allows you to buy an appreciating asset that you can eventually sell at a big premium over what you paid. Mortgages make you wealthy – that's the good-debt argument in four words.

Part of the problem with this reasoning is that it's incredibly expensive to own a home. While your home is – you hope – appreciating in value year by year, you're pouring in money to pay property taxes, keep your house in good working order and make improvements. A rough rule of thumb is that you'll spend 2 per cent of the value of your home per year on average on property taxes, insurance, utilities and upkeep. Add in the more discretionary expenses for renovation and you've got another 1 per cent or more in average annual costs.

Homes have appreciated by a lot more than that in recent years in many cities – doesn't this make them good investments and thus make mortgages good debt? Wrong again. The people who bought houses 10 or 20-plus years ago made a great investment, but that won't be repeated in the next decade or two. If houses rise by the same amount as they have in the past, the pool of buyers who can afford to buy will start to dry up. Affordability for the young adults of Generation Y is already a problem.

Houses bought today will be a place to raise kids, have a dog, park your car and otherwise enjoy having your own space. That's good stuff, but it doesn't make a mortgage good debt.

On paper, investment loans are easy to justify as good debt. If you buy some shares with borrowed money and they rise in price, your gains are magnified through what the investment industry calls leverage. Here's the problem with borrowing to invest – markets go down as well as up, and your losses are also magnified. Also, people freak when investments they borrowed to buy plunge in value. Too often, they sell and lock in egregious losses.

Borrowing to invest as measured through margin debt (people borrowing from their broker to buy securities) has almost doubled since 2009, paralleling the stock market's huge rebound from the last crash. Most people are temperamentally unsuited to borrow to invest, but after a big run-up is an especially bad time to do it. Maybe wait for the next crash so you can buy stocks cheap.

Student loans are the toughest type of good debt to critique because studies consistently show that a college or university degree helps generate higher income over a lifetime. But blanket approval of going into debt for a degree assumes there's a place in the work force for all grads, and that's not the case.

The mismatch between what students are studying and job opportunities is a quiet scandal in our educational system. Unless teens and their parents put some work into choosing a program, student loans can result in degrees that are worth little in the work force. Paying back these loans may take more than a decade and delay lifecycle events like buying a home and starting a family. Worse, bad student borrowing decisions can lead to still more borrowing in search of the right credentials to find a decent job.

Decades ago, when houses were more affordable and good jobs for young people were more plentiful, we could afford to make generalizations that some kinds of debt were good. Today, good debt is just another story we tell ourselves to justify our borrowing habit. 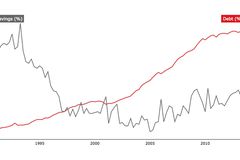