The insurance industry's response to the extreme weather of the past several years demands that you check the coverage for your home to see if it's water-tight.

Water has become the top cause of home-insurance claims, and insurers continually make changes to their policies to adjust. They've reduced coverage or raised deductibles for sewer backups in some cases, while also introducing coverage against what's known as overland water. That means water from heavy rainstorms or, in some cases, overflowing lakes and rivers.

If you've owned a home for any length of time, you know water is your enemy. Whether you own a new or resale home, you run the risk of water damage from water originating inside your house (leaky pipes, toilet or appliances) or outside (overloaded city sewers, powerful rain storms, fast-melting snow, floods). A study issued by the Canadian Institute of Actuaries found that water accounted for 48 per cent of home insurance claims in 2011, compared with 4 per cent for fire, 18 per cent for theft and 30 per cent for other losses.

Sewer-backup coverage is about cleaning up damage caused by water and, probably, raw sewage from your basement. This coverage has been available for decades and most people who own houses take advantage of it these days because of a growing incidence of extreme weather that overloads city sewer systems.

The same climate-related argument can be made for protecting yourself from overland water, which spares you the sewage but can still destroy your nicely renovated basement and the valuables you have stored there. "Overland water protection is increasingly relevant now with the rising number of extreme storms," said Adam Mitchell, president of Mitchell & Whale Insurance Brokers Ltd.

The definition of overland water differs from company to company, but generally it covers water that gets into your home through the foundation, basement floor or walls. The water may come from a powerful rainstorm or, in some cases, fast-melting snow. Overflow from bodies of fresh water, such as lakes and rivers, may be covered as well, but salt water is not.

Mr. Mitchell said overland water protection has been standard in commercial insurance policies, but was only included in residential coverage in the past couple of years. The shift came after a 2013 flood in Alberta, where insurance claims were initially denied because they were found by insurers to be related to overland water, which was not covered at that time. After a customer backlash, some insurers decided to cover flood-related claims in Alberta and then make this protection widely available to clients willing to pay for it.

As with sewer backup, overland water protection is priced according to the insurer's analysis of how risky your neighbourhood is for water-related claims. Your area's risk rating determines your premium, and possibly your deductible and limit on coverage as well. As with sewer-backup coverage, you may have a higher deductible for overland water than you do for other parts of your home-insurance policy.

Mr. Mitchell said that if you're in a low-risk area, overland water protection might be added at no cost if you have sewer-backup protection. Otherwise, overland coverage may be available as an add-on to sewer-backup protection, or on its own. Mr. Mitchell said the additional cost, in very rough terms, would range from $10 to $30 a month for districts with slight to moderate risk of flooding to significantly more for higher-risk areas.

His advice to homeowners in assessing this coverage: Look at your basement. An unfinished space used to store things that aren't particularly valuable may not need overland water protection. A nicely finished basement or one used to store valuable items should probably have this protection. "I think it's pretty well a must-have," he said. "But you have to look at the price."

If price is an issue, sewer backup is the more important coverage because you're likely dealing with water damage and contamination from sewage. The appeal of adding overland water protection is not having to worry about whether a backed-up sewer or water seeping in from ground level caused your flood, said Vito Losito of Canadian Insurance Brokers Inc.

"If you buy sewer backup and you buy overland, it doesn't really matter where the water comes from," he said. 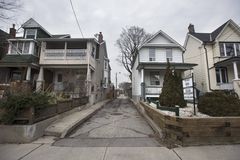 Ten ways the 2017 federal budget will affect your personal finances
Subscriber content
March 22, 2017
Here's a smart way to protect yourself from higher mortgage rates
March 28, 2017
Follow Rob Carrick on Twitter @rcarrick
Report an error Editorial code of conduct
Due to technical reasons, we have temporarily removed commenting from our articles. We hope to have this fixed soon. Thank you for your patience. If you are looking to give feedback on our new site, please send it along to feedback@globeandmail.com. If you want to write a letter to the editor, please forward to letters@globeandmail.com.
Comments