The people at the Value My Stuff website were tested not too long ago when a client consulted them about an unidentifiable but evidently quite old metal implement.

"We sent it around to three of our experts because we couldn't quite make it out," said Patrick van der Vorst, the man who founded what has been described as the online version of the Antiques Roadshow. "And then, our medieval art expert said: 'Oh, my god, it's a medieval chastity belt.' "

The estimated value for that chastity belt was the equivalent of as much as $4,765. It's the hope for an outcome like this that has led 200 to 300 people a day, some from Canada, to photograph items and send the pictures online to London-based Value My Stuff.

Is it a new form of prospecting for gold, or a symptom of society's compulsion to put a dollar value on everything? For some reason, people are crazy to find out how their much stuff is worth. The Antiques Roadshow TV show took off in the late 1970s in England and versions are running to this day, along with upstart competitors such as Pawn Stars.

Most customers of Value My Stuff's clients are from Europe, but North Americans are using the service as well. The cost: A $7.99 (U.S.) charge on your credit card for a single valuation, $19.99 for three valuations or $59.99 for 10. The valuations are unbiased because Value My Stuff and its stable of 50 in-house experts do not sell stuff.

For a while, one of the website's big Canadian success stories involved a woman who requested a valuation of a Chinese vase. "It's a kind of vase with a flaring top, so the person was using it as a fruit bowl in the house," Mr. van der Vorst said in an interview from Malta, where he was vacationing. "When she found out the value, of course she took out the fruit immediately."

Valuations on Chinese ceramics have gone through the roof lately, so it's not shocking that this vase was thought to be worth in the area of $200,000 (Canadian). Provisionally, that is.

"Our expert did say in the report that there are a lot of copies and fakes on the market, and that we would need to get it assessed to be 100-per-cent sure," Mr. van der Vorst said. "We helped her through that process and unfortunately we found out that it was a copy."

Another Canadian success story was a collection of unseen photographs of '60s rock icon Jimi Hendrix. "Our pop memorabilia expert got quite excited by those," Mr. van der Vorst said.

Value My Stuff opened in 2009, joining a few other similar online valuation services such as WorthPoint and WhatsItWorthToYou.com. Mr. van der Vorst's background includes 13 years spent at the auction house Sotheby's, where his specialty was 18th-century French furniture.

The experts at Value My Stuff have experience at Sotheby's or Christie's, another famed auction house. They're paid by the valuation and the busiest of them do 2,500 to 3,000 valuations per month. Each valuation includes a little background about the item, a date of origin and an estimate of its value along with some context.

If you want to sell an item, that's up to you. Your options include an auction house, an antiques or memorabilia dealer or online venues like eBay, Kijiji and Craigslist.

If you go for an auction house - check the Yellow Pages under Auctioneers - you should know a bit about how they work. In Mr. van der Vorst's world, the auction house would keep 10 to 15 per cent of the value of your item. An additional commission of around 20 per cent is added to the price the buyer pays.

Antiques dealers similarly take a cut for themselves off the estimated value of an object. If you decide to try and sell on eBay, Value My Stuff offers an online valuation certificate that you can present along with the details on your item.

Mr. van der Vorst said ceramic objects account for most of the valuation requests on his website, in part because of a shocking event last fall. A Chinese vase found in the home of a deceased London woman sold for $83-million (U.S.), more than 40 times the estimate prior to auction.

A Chinese buyer bought the vase, a development that helps explain why Mr. van der Vorst is talking about expanding Value My Stuff into China. "There are many wealthy collectors there who are buying back their cultural heritage."

Three to consider are Value My Stuff ( valuemystuff.com), Worthpoint ( worthpoint.com) and WhatsItWorthToYou.com; you may find more by doing an online search.

Valuations get cheaper if you buy them in bulk.

You'll want to upload three or four shots that include any imperfections, as well as any signatures or marks; help the evaluators by giving them a sense of the size of your item.

Anything to help make your valuation more precise.

E-services are a good substitute for the mailman
June 6, 2011 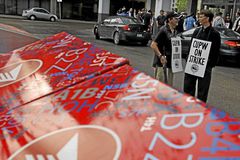